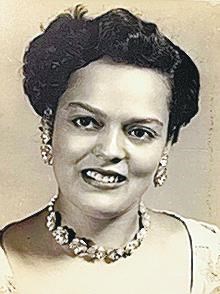 BORN
1930
DIED
2021
ABOUT
Xavier University Preparatory High School
Althea - what a gift! Sunrise: 5/22/1930 - Sunset: 12/21/2021. To love and be loved - that's God's intention for each of us…all of us. Nobody embodied that life…that "gift"…better than Althea Lanoix Newman. She loved deeply & truly, that's why she is beloved and will always be cherished by so many. Sadly, this beloved wife, mother, sister, aunt, cousin, and friend left us, but gloriously she returned to God's loving embrace on December 21, 2021. Althea Marie Lanoix Newman was born in New Orleans, Louisiana on May 22, 1930, to the late Joseph Lanoix and Rhea Ferrier Lanoix. She was the sister to the late Elliott Lanoix, Iris Lanoix Viltz, Aldon Lanoix, the late Janet Lanoix, Barbara Lanoix Porche, the late Leslie Lanoix, and half brother Lucien Johnson (Dorothy). Althea was raised by her grandmother, Inez Soupenne Ferrier, with her aunts & uncles…the late Inez Ferrier Morgan Stanton, the late Horace, Leon and Walter Ferrier & survived by Emmet Ferrier, as well as cousins who were like brothers and sisters-Glenn Morgan, Earline Ferrier-Vaughn and Rodney Ferrier. In Althea's early life she found love in the life and lessons of her grandmother, Inez, who taught her how to sew, imagine and create better than any clothing designer, cook with more zest and zeal than the best New Orleans chefs, and fix ANYthing - an original do-it-yourself-er! Grandma Ferrier also taught her to love family and children without limits. Althea's major goal was to have a loving family of her own. Althea attended Xavier Preparatory High School in New Orleans and was a part of the graduating class of 1948. Althea furthered her education at Straight Business School. Although she had dreams of becoming a clothing designer, loyalty to family kept her home, and not long after came true love with Everett Raymond Newman, the love of her life. Everett & Althea were married on July 11, 1953. Soon after they started their family. The firstborn-Denise Ann Newman - not long after came Everett Raymond Newman Jr, Diane Theresa Newman, Carol Ann Newman, and David Adam Newman. New Orleans is where Everett and Althea made their home and found their community. Everett's life work was all about helping the underserved to achieve success and financial independence-buy homes, send their kids to college and own businesses of their own. He did so following in the footsteps of his father, Adam Joseph Newman (husband of Albertine Paltron Newman), one of the founders of Standard Life Insurance Company, then via top leadership roles at Corpus Christi Parish Credit Union (in NOLA), United Federal Savings and Loan, CUNA (Credit Union National Association), the Louisiana Credit Union League, the National Urban League & the Ernest N. Dutch Morial administration. Behind every great man is a strong woman. Althea was that woman, there by his side for every achievement. While raising five children, Althea found time to design and create beautiful ball gowns, Mardi Gras costumes & umbrellas, wedding dresses, coats, hats, purses, and designer dresses. She was also a talented oil painter, crocheter, interior decorator, jewelry maker, and floral designer. Our home was her art studio. Althea & Everett remained in New Orleans most of their lives until Hurricane Katrina devastated their home in Gentilly in 2005, and they left for higher ground in Baton Rouge, Louisiana. The final years of Althea's life were spent with Everett taking care of the wife who always took such great care of him…his "Cinderella." They were…and will forever be…a true love story. Even in her final days…Althea was astute, creative, quick-witted, and full of her own special charm…and that extraordinary ability to make others feel loved. Mom leaves to cherish her memory: a loving and devoted husband of 68 years Everett Raymond Newman, her children Denise, Everett Jr, (the late Angela Jackson Newman), Diane, Carol (Charles Brentt Rhorer), and David (Elizabeth DiMarco Newman)…as well as grandchildren Everett Newman III (JoDana Johnson & great-grandchild Everett Newman IV), Delon Newman (Jackie Muller), Devin Newman, Andre Lanoix Newman (Kristen Sara-Ann Wooten and Rilynn Monroe Wooten), Monique Danielle Newman, Christine Elizabeth Harrold, Adam Philip Harrold, "Mambo"…and a host of cherished In-laws, nephews, nieces, cousins & friends. To know Althea Lanoix Newman is to love her. She will be forever in our hearts. Love, The Newman Family. Note: A private service will be held at a later date.

Published by The Advocate from Jan. 6 to Jan. 9, 2022.
To plant trees in memory, please visit the Sympathy Store.
MEMORIAL EVENTS
To offer your sympathy during this difficult time, you can now have memorial trees planted in a National Forest in memory of your loved one.
MAKE A DONATION
MEMORIES & CONDOLENCES
7 Entries
Di, Dave and all the Newman family and friends- My deepest sympathy to all of you. Sending you all strength.
Kat Vance
Work
January 11, 2022
As I read Althea obituary it reminds me so much of my Mother and how Mrs Newman was a gift from God for her loving family...she was an over achiever in life that I'm sure her parents Joseph and Rhea was so very proud of their Althea...Now that she has left us for that eternal life in the Heaven above we all realize Althea is in a Better place ...As the days and weeks pass, and as you return to life's routine, may you continue to feel comforted by the love and support of family and friends that surround you...
David M O'Daniel
Other
January 11, 2022
Reminiscing her very special personality, Mrs. Althea Newman was tenacious for organizing home life. She shared her children´s friendship with unyielding guidance of time management. She was task minded and a priority setter for chores. All spoken in a warm, caring, and friendly conversation - over her delicious, stuffed eggplant. There was no wavering of discipline; because, it was reinforced at the Althea Newman household. To Denise, who expresses GOD, I always trust that our loved ones are at peace and among the everlasting. Extending my sincere condolences to Mr. Everett Sr. and the entire Newman Family: Denise, Everett Jr., Diane, Carol, and "Dave"... my prayers have been with you for your loss during a difficult time.
Julie Romain
Friend
January 9, 2022
My deepest condolences to the Newman family. I have fond childhood memories growing up on Virgil with your family, and seeing your mom´s friendly face in the neighborhood.
Angela Chachere
Other
January 9, 2022
Our deepest condolences to the Newman Family.May God bring bring Peace and Love to All of you.May her soul Rest In Peace God Bless
Ernest,Consuela(Connie Ferrier
Other
January 9, 2022
I was heartbroken to hear of Aunt Althea´s passing. I still have such fond memories of summers spent in the pool at the house, sneaking down the stairs for snacks and her delicious home cooked meals. She was always smiling and loving and encouraging. My condolences to all of you, Uncle Everett, Everett, Jr., Denise, Diane, Carol, and David. Though years and miles have separated us, my heart is still with all of you in this time of sadness.
Leslie Lanoix Davis
Family
January 7, 2022
to mr. everett newman and the newman family i offer my deepest sympathy and prayers may you and your family cherish all the lovely memories that she had with the family may her soul rest in peace
LESTER (POLLY) LASSAI
Friend
January 6, 2022
Showing 1 - 7 of 7 results