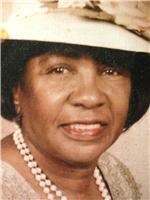 FUNERAL HOME
Charles Mackey Funeral Home
1576 Robin St.
Baton Rouge, LA
Amy Lea Brazier Pugh of Baton Rouge passed away on Feb. 9, 2014 at the age of 80. She was born on August 8, 1933 in Baton Rouge, LA. She was a graduate of the Southern University Laboratory School. Amy was an alumna of Southern University and a retired teacher in the East Baton Rouge Parish School System. Visitation will be at Mt. Pilgrim Baptist Church on Tuesday, Feb. 18, 2014, from 9-11:00 am. However, Delta Sigma Theta Sorority's Omega Omega will take place at 10:00 am. Religious services will start immediately at 11:00 am at the church, conducted by Pastor Rev. Jesse B. Bilberry, Jr. Interment will take place directly afterwards at the Port Hudson National Cemetery. She was a member of the NAACP, Joviettes, Baton Rouge Sigma Alumnae Chapter of Delta Sigma Theta Sorority, Inc., just to name a few. She is survived by her three son Charles W. Pugh, Jr., Eric G. Pugh, Reginald T. Pugh, Sr.; eight grandchildern; one great grandchild; four sisters-in-law, Ethel Brazier, Joan Pugh (Culver City, CA); Barbara Pugh and Carrie Pugh-Paul (Amite, LA); three brothers-in-law, Jordan Pugh (Culver City, CA), Conney Pugh and Joseph Pugh (Amite, LA); nieces; nephews; and a host of relatives and friends. Preceded in death by her mother, Ella Spears Brazier; father, Wiley H. Brazier, Sr.; husband, Charles W. Pugh, Sr.; daughter, Charmaine Pugh-Mack; two sisters and six brothers. Arrangements with Carney and Mackey Funeral Home, (225) 774-0390.
Published by The Advocate from Feb. 15 to Feb. 18, 2014.
To plant trees in memory, please visit the Sympathy Store.
MEMORIAL EVENTS
To offer your sympathy during this difficult time, you can now have memorial trees planted in a National Forest in memory of your loved one.
Funeral services provided by:
Charles Mackey Funeral Home
MAKE A DONATION
MEMORIES & CONDOLENCES
9 Entries
I am just finding out about Mrs. Pugh's passing and would like to extend my deepest sympathy. She was my 5th grade teacher at Porthudson Elem. School. She was a great teacher and was well loved by her students. Rest in peace Ms. Pugh.

Gretchen Monroe
Zachary, LA
March 10, 2014
Take comfort in knowing that now you have a special guardian angel to watch over you.
Annie & Bobby Handy
February 20, 2014
I offer my sincere condolences to the family. May you draw comfort in knowing that God cares for you and will sustain you during these difficult times.
February 20, 2014
Eric,
You and the family have my deepest condolences.

Terrilyn Lewis-Henry
Terrilyn Lewis-Henry
February 19, 2014
ALWAYS REMEMBER THAT GOD IS TAKING CARE OF YOU AND THE FAMILY. ANN ROBERTSON
February 18, 2014
Eric and Family
My thoughts and prayers are with you and your family during the loss of your mother.
You are in my thoughts right now, in my prayers tonight and in my heart forever as I lift you up to our Father who cares for you.
Tonya G. Robertson
February 17, 2014
May God bless you and your family during this time of sorrow.
Michelle B.
February 17, 2014
MY PRAYER OR WITH YOU AND THE FAMILY.
TONY ROBERTSON
February 17, 2014
I will not leave you as orphans, I will come to you. John 14:18