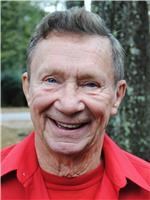 A loving dad, papa and friend went to his eternal home, on Saturday January 16, 2016 at the age of 81. Mr. Smith served in the United States Army during the Korean War and retired from Gulf States in 1992 after 35 years of service as a garage shop foreman. He owned, along with his son, A-1 Vacuum Cleaners. He also owned and operated Greenway Billiards in the early 70s, where he developed a reputation as a pool shark. After retirement he frequently traveled with M-Squared Aircraft, his son-in-law's company, as the camp cook. In his spare time he enjoyed spending time with his family and friends, entertaining guest with his cooking abilities, piddling in his yard, cheering on the LSU Tigers and driving his 1934 Pontiac. He leaves behind cherished memories with his daughter, Toby Gail Smith and husband Paul Mather; son, Gus Smith and wife Kelly; granddaughter, Summer Smith Brown and husband Austin; three grandsons, Ty Smith with Cierra McKee, Forrest Smith and Nathan Mather; and numerous friends. He was preceded in death by his loving wife of 58 years, Earline Lavergne Smith; daughter, Hollie Faye Smith; brother, Bobby Conrad, sister, Shirley Smith Seale; and parents, Willie Mae Johnson and Charles Smith. Magoo will be remembered most for his generosity and compassion, dashing blue eyes and enduring smile. A Celebration of Life will be held, on Saturday, January 30, 2016, 1:00-5:00pm at the VFW Hall Post 3784, 13214 S. Choctaw, in Baton Rouge. Remembrances may be made to the Pancreatic Cancer Action Network, 1500 Rosecrans Ave., Manhattan Beach, CA 90266.
Published by The Advocate from Jan. 20 to Jan. 30, 2016.
To plant trees in memory, please visit the Sympathy Store.
MEMORIAL EVENTS
To offer your sympathy during this difficult time, you can now have memorial trees planted in a National Forest in memory of your loved one.
MAKE A DONATION
MEMORIES & CONDOLENCES
17 Entries
OFFERING PRAYERS FOR A FALLEN SOLDIER.
Barry Jarreau
February 1, 2016
I"ll miss ya buddy glad your finally at rest and think of you in every pool tournament at the watering hole you or missed by many and still in are hearts your friend always MC Jeff
jeff causey
January 30, 2016
Magoo was my first boss at GSU in 1984. I'll always remember that he was much more than a "boss", more like a step-dad. He was fond of saying "After quitting time, we'll drink beer and shoot pool all night. But come 7:00am, your butt is mine". LOL, I never forgot that. RIP Magoo, you are sorely missed.
Donald McKenzie
January 29, 2016
A more gentle man I never knew. Wilbur was a quite and always ready to help, anyone anytime. He attended to neighborly needs and wishes without being asked are rewarded. A better neighbor one can never have. He and his most gracious daughter Toby leaves an irreplaceable void on Glendwild drive in Denham Springs, Baton Rouge and in the hearts of numerous friends. I'm glad I knew Wilbur Smith.
Jerry Westmoreland
January 26, 2016
Although only briefly, it was a pleasure to know you; always a Gentleman. I enjoyed our competition on the "green". May God bless you and your family.
Frank Collura
January 25, 2016
Smitty,
I miss our monthly retiree breakfast
meetings at Frank's on the airline with Sonny, Mac, Jimmy and the gang. Thanks for some good memories, Magoo.
Don Gascon
January 22, 2016
sorry for your loss Toby. My prayers go out to you and your family.
Diana Sawvell
January 21, 2016
Magoo was such a sweetie. Enjoy remembering all the good moments. :-)
Kim Kendrick
January 21, 2016
I will miss you, prayers for the family :(
Brandy Kerley
January 21, 2016
Toby, we are so sorry for the loss of your Dad, we continue to pray for you and the family.
Carol & Steve Pearce
January 21, 2016
Your family is in our thoughts and prayers in your time of loss.
Mathew / Amber Groh
January 21, 2016
Toby & Summer, I'm so sorry for your loss. Peace of the Lord be with you.
Brenda Howard
January 21, 2016
Toby and Summer, my heart aches for you. I know how much he meant to you both. Thoughts and prayers to both of you and the entire family. I choose to think he is reunited with your mother. It's the way I feel about my parents. Hugs to you both!
Linda Day
January 21, 2016
You were my Angel in life and you are now our Angel to watch over us. I love you just as much as I loved my own father, thank you for allowing me to be a part of your life all these years and giving me another family I love dearly. You will be so missed everyday. RIP my friend we will see each other again. Fly high
Cindy Shaffer
January 21, 2016
He was my Angel while here on this earth now he will be our Angel to watch over us. My love for him was the same as the love of my own father. We will miss you dearly everyday. Thank you for allowing me to be in your life for all these years it was an honor to be apart of your family. RIP my friend and I will see you again. I love you so fly high Angel.
Cindy Shaffer
January 21, 2016
Toby, My thoughts and prayers are with you and your family as you walk this journey. Peace be with you!
Joanie Clark Hebert
January 21, 2016
To the family of c.w.smith, pete and gail bergemann want to say
That y'all are in our prayers at to time in your life. He was a very respected supervisor and a friend that made even the wives from he workers feel welcomed.
pete & gail bergemann
January 21, 2016
Showing 1 - 17 of 17 results