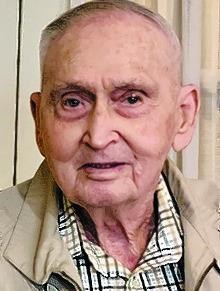 BORN
1928
DIED
2022
FUNERAL HOME
Niland's Funeral Services, Inc.
210 West End Drive
New Roads, LA
Clyde David, our beloved father, left this earth in the midst of his loving family at his home on January 9 2022, at the age of 93. He was born on February 5, 1928 and was a native of Hermitage, LA, and a resident of New Roads, LA. After farming for a short time, Clyde began his career with Atchafalaya Basin Levee District in 1951 and eventually became supervisor, retiring with 33 years of service. He also worked at Bergeron's Pecan Plant for many years. He is survived by his children, Linda Torres (Lee), Loretta Leonard (Carl), Debra Donovan and Liz Andre (Cary); grandchildren, Paula Speer (Luther), Kevin Patin, Jeff Patin, Jeremy Torres (Amanda), Brandon Donovan (Regina), Jamie Leonard Brubaker (Philip), Trey Donovan (Melissa) and Ray Donovan; great-grandchildren, Emily Torres, Abby Davis (Jarrett), Lucas Patin (Olivia), Zachary Speer, Zoe Speer, McKinzie Donovan, Brock Donovan and Hailey Richard, who affectionately called him "Paw Paw D", a great-great-granddaughter on the way, Magnolia Kay Davis, and numerous other family members, friends and neighbors whom he loved dearly. He was preceded in death by his wife, Violet David, who was his heart and soul; parents, Edwin and Clemencia David; son-in-law, Mike Donovan; and siblings, Edward David, Roy David, Ada Jarreau, Verda Smith, Isabelle Bizette, Mabel Straight, and Janice David. On most days, even well into his 90's, you could find Clyde in his garden or in his yard. Clyde was known for his bountiful vegetables grown in his garden and would share his bounty with others. He could fix anything that was broken and made many house calls to his children's homes, finding joy in assisting in the repair. He enjoyed working in his yard, keeping his car immaculate and listening to the birds sing. He found delight in cooking for his family and served many Sunday lunches to a full house of children and grandchildren. He adored spending time with his son-in-law and best friend, Cary, who was always there to lend a helping hand. When he could no longer work in his yard, Clyde reluctantly handed the job to his son-in-law, Lee, who kept up his yard as he would have. He was a member of St. Mary's Catholic Church and a committed adorer at the perpetual adoration chapel along with his wife, Violet, for many years. Clyde handed down to his children and grandchildren his tradition of a strong faith, attending daily mass, reading his bible each morning and reciting the rosary throughout the day. He was a wise and humble man, who believed in family and the value of hard work. He loved without boundaries and found joy in the simple things in life. He will be greatly missed. A walkthrough visitation will be held at Niland's Funeral Home in New Roads, LA on Wednesday, January 12 from 9 until 9:45 am, with a mass of Christian burial beginning at 10 am at St. Mary's Catholic Church in New Roads, LA. Entombment will follow at False River Memorial Park. Pallbearers will be Kevin Patin, Jeff Patin, Jeremy Torres, Brandon Donovan, Lucas Patin and Zachary Speer. Honorary pallbearers will be Cary Andre, Lee Torres and Carl Leonard. Many heartfelt thanks to all of his family and friends, Dr. Donald Doucet and his staff for their many years of care, Pointe Coupee Hospice, and especially to his caregivers, Angela Aucoin, Connie Hurst, Angela Gosserand, Cassie Kimball, Linda Gautreau and Karen Hurst, for the kindness and care shown in Clyde's last days. You will forever hold a special place in his heart and that of his family.