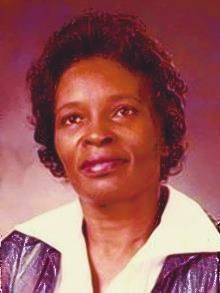 BORN
1932
DIED
2022
FUNERAL HOME
Charles Mackey Funeral Home
1576 Robin St.
Baton Rouge, LA
Lord, thou hast been our dwelling place in all generations. Before the mountains were brought forth, or ever thou hadst formed the earth and the world, even from everlasting to everlasting, thou art God. Psalm 90: 1-2. Helen Elizabeth Tennart, 89 years old, beloved mother, grandmother, great-grandmother, and great-great grandmother was called to be with her Lord and Savior, Jesus Christ, on Tuesday, January 4, 2022, surrounded by her loving family. She entered this world on February 20, 1932, born to Boysie and Rosella Eubanks Tennart, in Irene Louisiana. She was a light in the lives of everyone that knew her. Helen is survived and left to cherish memories of her by her daughters Brenda Franklin King and Barbara A. Fisher; her sons Jerry L. Ghoram, Gregory W. Ghoram, Leonard D. Tennart; her sister, Audrey Stewart; grandchildren, Marquillis S. Ghoram, Marlone S. Black, Sr., Terika Turner, Jarred Ghoram, Jerrica Ghoram, Trenaja Bennett, Bristi Omar Wade-Ghoram, Rashid Dent, Kareema Dent, Abdul'Kareem Dent, Khadijah Dent, Bilal Lewis, Muhammad Ghoram and Ayyub Ghoram; twenty great-grandchildren; nine great-great grandchildren and a host of nieces and nephews. Helen is preceded in death by her father, Boysie Tennart; mother, Rosella Eubanks Tennart; son Abdullah Raqeeb Ghoram (Frank James Ghoram, Jr.); grandchildren, Shaylon LaCoya Day and Asha Bennett; brothers, John Tennart, Shelley Tennart, Marshall Tennart, Gus Tennart, William Tennart, Amos Tennart and Calvin Tennart; sisters, Hazel Tennart, Carrie Mae Dunn, and Rosa Lee Jackson. Graveside services and burial will be held on Tuesday, January 11, 2022, 11 am, at Roselawn Memorial Park and Mausoleum. 4045 North St., Baton Rouge Louisiana 70806. Reverend Joseph Lawrence, New Life Missionary Baptist Church, officiating. She was thoughtful, full of understanding to all who knew her. She always said what was on her mind in a sweet and loving way. A conversation never ended without her saying, "I love you, and the good Lord loves you too." The family would like to give special thanks to Lane Memorial, Ochsner Hospital, St. Joseph Carpenter's House and all of the doctors, nurses and sitters who assisted in her care. Due to Covid-19 restrictions, masks are required, and social distancing will be in place.

Published by The Advocate from Jan. 8 to Jan. 11, 2022.
To plant trees in memory, please visit the Sympathy Store.
MEMORIAL EVENTS
Jan
11
Graveside service
11:00a.m.
Roselawn Memorial Park and Mausoleum
4045 North St., Baton Rouge, LA
Funeral services provided by:
Charles Mackey Funeral Home
MAKE A DONATION
MEMORIES & CONDOLENCES
6 Entries
My Condolences to the Ghoram and Tennart family. We will keep you in our prayers
Mimia Spland Hunt
January 11, 2022
My thoughts and prayers are with you all. I loved Mrs. Elizabeth. Always so pleasant to be around.
Sharon King Johnson
January 11, 2022
Madea you will be truly miss thank you for accepting me unto the family I will forever Cherish our memories me, Marlone, Miracle will miss hear you saying God love you & so do I I'm sending my condolences to the Tennant, and Ghoram family love you all. Love your grandson Marlone, granddaughter Kecia,and great granddaugter Miracle
Lakecia Black
January 11, 2022
We extend condolences and deepest sympathy to the family, May the LORD be with you all in this time of need.
Randy Black and Yvonne Black Joseph and family
January 10, 2022
Madear, you will always be remembered and memories of you will always be cherished. Thanks be to God who had allowed us to be family and for the opportunities to enjoy one another. The imprints you have made in my life will never be removed. I am so glad to have been part of the fabric of your life. I love you.
Gloria Tennart
January 9, 2022
May your hearts soon be filled with wonderful memories of joyful times together as you celebrate a life well lived.
Mary Spland Crump
Other
January 8, 2022
Showing 1 - 6 of 6 results