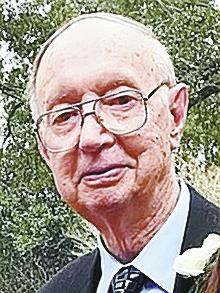 FUNERAL HOME
Resthaven Gardens of Memory & Funeral Home
11817 Jefferson Highway
Baton Rouge, LA
James Gilbert McMurry passed from this life Sunday morning, January 2, 2022. A native of Winnfield, Louisiana, he resided in Baton Rouge since 1964, when he moved here with his family to accept a position as professor of Industrial & Technical Education, at LSU. He remained at LSU for the duration of his career, eventually rising to the position of department chairman. He received his undergraduate degree from Northwestern State University, where he also met his future wife, Jeanette Wood McMurry in a dance class they both attended. Upon graduating, he served a stint as a lieutenant in the US Army and married Jeanette, his college sweetheart. They lived at the Army base in El Paso, TX, where he trained gunnery crews in anti-aircraft artillery marksmanship. Post-Army, he attended LSU for his Master's degree, and the University of Missouri where he received his Doctorate. He taught high school industrial arts to support his family, which now included son Gil and daughter Sarah. Five years after beginning his career at LSU, son Alan joined the family. His favorite pastime was hunting and fishing, dating back to his youth, where he grew up in the country, outside Winnfield, LA. His favorite entertainment was attending LSU football and basketball games. Anyone who knew Gilbert will tell you that he was a tireless worker, and that a substantial amount of his effort was dedicated to the support and growth of his church, St. John's United Methodist Church. They will also tell you that he could fix most anything and was often called upon by friends and family to do just that. He was preceded in death by his parents, Aaron Justin McMurry and Grace Tullos McMurry, and his sister Justine McMurry Shaw. He is survived by his wife of 66 years, Jeanette Wood McMurry, and three children: James Gilbert "Gil" McMurry, Jr, Sarah McMurry Godwin (Keith), Alan Justin McMurry (Elaina). Also, six grandchildren: Ella Godwin Webb (Brian), Jason Godwin, Jack Godwin (Stephanie), Ben Godwin, Allie McMurry, and Eryn McMurry. And two great grandchildren: William Webb and Luna Godwin. Visitation and funeral will be held at St. John's United Methodist Church, at 230 Renee Dr. and Highland Rd. on Friday, January 7, 2022. Visitation begins at 12:30 PM, followed by the funeral service at 1:30 PM. Burial follows at Resthaven Gardens of Memory Cemetery, 11817 Jefferson Hwy. Please follow covid protocols. In closing, the family wishes to express their appreciation for the many healthcare professionals who provided such sensitive and compassionate care throughout this most difficult time. Most especially Tina, Longet, Patra, and Karlisha.

Published by The Advocate from Jan. 4 to Jan. 7, 2022.
To plant trees in memory, please visit the Sympathy Store.
MEMORIAL EVENTS
Jan
7
Visitation
12:30p.m.
St. John's United Methodist Church
230 Renee Dr. and Highland Rd., LA
Jan
7
Funeral service
1:30p.m.
St. John's United Methodist Church
LA
Funeral services provided by:
Resthaven Gardens of Memory & Funeral Home
MAKE A DONATION
MEMORIES & CONDOLENCES
10 Entries
So sorry for the loss of a kind and caring man. Glad I had the opportunity to get to know him and Janette at the LSU Faculty and Staff Retirees Club meetings. Sending prayers for strength during this most difficult time.
Marion A Territo
January 8, 2022
May God bless you and your family in this time of sorrow.
Ivy L Kohll
Other
January 7, 2022
Deepest sympathy to the McMurry family. I will always remember Mr. McMurry for his kindness and willingness to help, especially when he gave me his expertise on my bathroom counter renovations. He was a very intelligent and patient man. Prayers and love to the McMurry's,
Danielle and Grant Gueho, Cliff Settoon
January 7, 2022
Such an incredible and Godly man. May the many memories sustain you in the days ahead. Prayers and love!
Kimberly Carter Bernard
Friend
January 6, 2022
Sorry for loss, best wishes .
Mark David
January 6, 2022
Gil was such a leader and blessing while we pastored from 1971-1976. There could be no finer family found anywhere. Blessings to you all! Wm
William and Fane Peeples
Work
January 6, 2022
We are so very sorry to hear of Gil's passing and offer our condolences to all his family.
Alice, Gordon, Janette and Amy Holcomb
January 5, 2022
Having grown up next door to the McMurry family, we got to see first hand what a wonderful man he was. I can still hear Mrs Jeannette call for him out the back door. We send you prayers of peace and comfort during this difficult time. I wish I could be there to celebrate his life with you on Friday.
Jennifer Jenkins McKnight
Friend
January 5, 2022
A fine and genuine man. I am blessed that he was so involved with my childhood. Will always think of camping and trot lining on the banks of old river when I think of him. Our prayers are with Mrs Jeanette and family, you are not alone in missing a wonderful man.
Scott Wharton
January 5, 2022
What a blessing to have been given the privilege of knowing and loving Uncle Gil. He was a wonderful man.
Lorie Speer
January 5, 2022
Showing 1 - 10 of 10 results