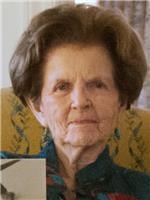 BORN
1920
DIED
2017
FUNERAL HOME
Rabenhorst Funeral Homes Downtown
825 Government Street
Baton Rouge, LA
Jane Porter Middleton passed away peacefully at her home in Baton Rouge on Saturday, November 11, 2017. She is survived by her three children: son, Frank Walters Middleton III; son, Vernon Porter Middleton and wife, Linda Woodin Middleton; and daughter, Jayne Lobdell Middleton, all of Baton Rouge; her four grandchildren, Frank Walters Middleton IV and his partner, Charles Franklin Scherer of Miami, FL; Blake Weldon Middleton of Baton Rouge; Tate Hodges Middleton of Baton Rouge; and Virginia Middleton Enright and husband, Thomas Leslie Enright Jr.; and three great-grandchildren Eleanor Jane Enright, William Thomas Enright and Patrick Bernard Enright, all of Baton Rouge. Jane was preceded in death by her parents, Charles Vernon Porter and Jayne Lobdell Porter; her husband, Frank Walters Middleton Jr.; and her daughter-in-law, Gay Gipson Middleton. She was born on August 28, 1920, at the family home on Convention Street and raised in the Garden District on Oleander Street. She attended Dufroq Elementary, Baton Rouge Junior High and Baton Rouge High Schools. In 1936, at age of 16, Jane enrolled at LSU where she earned Bachelor of Arts (English) and Bachelor of Science (Library Science) degrees. More notably, it was at LSU that she met her future husband, the love of her life. At LSU, she was a member of Chi Omega Sorority and served as its Chapter President. She was also selected as a Pershing Rifles Sponsor. Her attendance and lifelong dedication to LSU actually originated as a young girl of 6 when her father took her to LSU football games on the new LSU campus. After graduation, she continued involvement on campus with the LSU Alumni Association, the LSU Centennial Committee, the LSU Student Union Advisory Board, and the Chi Omega House Corporation during the period of planning, construction and decoration of the current house. Jane served greater Baton Rouge through Rotaryanns (Rotary Auxiliary), Goodfellows, Baton Rouge Bar Association Auxiliary, Protestant Girls Home Board of Directors, and the Junior League of Baton Rouge (since 1941), working with the Nearly Nu project and as a member of the original River Roads Recipes Cookbook committee. She was a lifelong, active member of St. James Episcopal Church of Baton Rouge, where she was baptized, confirmed and married. She taught Sunday School, was on the Altar Guild, and a member of the St. Agnes Chapter of the Women of the Church. She was a member of the National Society of the Colonial Dames of America in the State of Louisiana, the Rebels Dance Club, The Modern Reviewers Book Club, The Sewing Club, Baton Rouge Country Club, The City Club of Baton Rouge and the Baton Rouge Assembly. Jane and Frank were inseparable and always brought family and friends into their circle, entertaining at their home or at the Porter family camp on the Amite River. The three children and their friends were welcomed visitors for many activities. Jane adored her friends and her special canine companions. She puttered in her yard diligently growing and then arranging flowers for her home. Her love of travel, especially with her husband, visiting New York City, Europe, the Florida beaches, Lookout Mountain, TN, and St. Francisville were energizing for the whole family. Upon her return, she would diligently make picture albums and scrapbooks to memorialize the events for all to enjoy. A list-maker and diarist extraordinaire, she kept the whole family organized, conscientious, and, occasionally, on time. She was devoted to Taylor, Porter, Brooks and Phillips, the law firm her father and Benjamin Taylor formed in 1912 and where her husband and three children practiced. Visitation will be held on Saturday, November 18, 2017, in the Parish Hall Parlor of St. James Episcopal Church of Baton Rouge, from 11:00 a.m. until a Memorial Service in the Church at 12:30 p.m., celebrated by The Rev. Ralph F. Howe Jr. A private, family burial will be conducted on Saturday, November 18, 2017. In lieu of flowers, the family suggests that memorial donations may be made to St. James Episcopal Church of Baton Rouge, LSU Foundation, Baton Rouge Area Foundation or another charity of choice. Rabenhorst Funeral Home is in charge of the arrangements.
To plant trees in memory, please visit our Sympathy Store.
Published by The Advocate from Nov. 14 to Nov. 18, 2017.
MEMORIAL EVENTS
Nov
18
Visitation
11:00a.m. - 12:30p.m.
St. James Episcopal Church
in the Parish Hall Parlor, Baton Rouge, LA
Nov
18
Memorial service
12:30p.m.
St. James Episcopal Church
, Baton Rouge, LA
Funeral services provided by:
Rabenhorst Funeral Homes Downtown
MAKE A DONATION
Please consider a donation as requested by the family.
MEMORIES & CONDOLENCES
8 Entries
Jayne and family,

I am so sorry to hear of your mother's passing. I know that you adored her. She set a perfect example of what a lady should be. You are all in my thoughts and prayers.
Kathy Robertson
November 16, 2017
She was ssuch a lovely and gracious lady. God bless. Rebel Slack
November 16, 2017
Dearest Jayne, my closest friend for so many years, my loving thoughts and prayers are with you and the entire Middleton family. Your mother was the epitome of a gracious, gentle and caring lady, and always made me feel a part of the family. With love always, Genie
Genie Epperson
November 15, 2017
We all loved her so much and our families parallel trails through the years made her 'Aunt Jane' to all the Powers clan. And so she will remain. (Plus she could tell great stories of our parents courtship, since they never would).
Love to All.
The Powers Family
November 15, 2017
Jayne, Chip, and Vernon, your mother was a grand, lovely woman. All my thoughts are with you and your families.
Wendy Bessette
November 15, 2017
Vernon, Chip & Jane. She was a grand lady, and will be missed and remembered for her kindness.
Richmond
November 14, 2017
To the Middleton family,
I was saddened to read of Ms. Jane's passing. She was one who made our city a better place to call home. Please know you're all in my thoughts & prayers.
Pam Bordelon
November 14, 2017
Jayne,
I am so sorry for your loss! My thoughts and prayers are with you and your entire family.
Kelli Patin
November 14, 2017
Showing 1 - 8 of 8 results