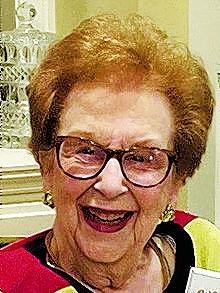 Jean Rose London Eisenbach, 91, passed away on September 12, 2021, in Baton Rouge. A native of Hattiesburg, Mississippi, she attended the University of Alabama and Sophie Newcomb College from 1948 to 1952. Jean was a member of Congregation B'nai Israel and a resident of Baton Rouge for more than 60 years. She was a homemaker, wife, and mother, as well as a volunteer at the Baton Rouge Crisis Intervention hotline for a number of years. She was also one of the founders of the Baton Rouge Association for Gifted and Talented Students. Jean was an avid bridge player and member of a weekly bridge game for more than 40 years. After moving to Assisted Living at St. James Place three years ago, she not only made a whole new group of friends but also saw to it that a regular blackjack game was established. She was a warm and engaging person who never met a stranger and always made others feel welcome and appreciated. Called Mimi by her grandchildren and great-grandchildren, she had special sayings (her grandchildren termed them "Mimi-isms") that delighted her family and friends. She touched so many lives with her warmth and was a wonderful role model of how to love, parent, and treat others. All who knew her will treasure those memories. A devoted and loving daughter, wife, mother, grandmother, and great-grandmother, Jean was preceded in death by her parents, Ruth Cramer London and Simon London, brother Alvin Newman London, and brother-in-law Richard Scherzer; and survived by: her husband, Robert Leonard Eisenbach, Jr., daughter Janice Eisenbach Day and son-in-law Robert of Baton Rouge; son Robert L. Eisenbach III and daughter-in-law Barbara of Piedmont, California; four grandchildren, Robin Day of Baton Rouge, Lauren Day Walker and husband David Walker of Mandeville, and Rose Eisenbach and Samuel Eisenbach of Piedmont, California; two great-grandchildren, Ethan Scott and Emma Scott and their step-sisters Sophia and Madison Walker; sister-in-law Lynnette Eisenbach Scherzer of White Plains, New York; and a special niece, Ann London Liberman and husband Mitch, of Houston, Texas, and grand-niece Leslie Liberman, of New York City. In lieu of flowers, please consider making a donation in her memory to one of her favorite charities, the Greater Baton Rouge Food Bank, 10600 South Choctaw, Baton Rouge, LA 70815, www.brfoodbank.org, (225) 359-9940. Please leave condolences and memories at www.rabenhorst.com.

Published by The Advocate from Sep. 15 to Sep. 17, 2021.
To plant trees in memory, please visit the Sympathy Store.
MEMORIAL EVENTS
To offer your sympathy during this difficult time, you can now have memorial trees planted in a National Forest in memory of your loved one.
MAKE A DONATION
MEMORIES & CONDOLENCES
0 Entries
Be the first to post a memory or condolences.