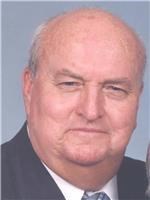 FUNERAL HOME
Greenoaks Funeral Home
9595 Florida Blvd
Baton Rouge, LA
John L. Kirkwood a native of Zachary, La. and resident of Baton Rouge, passed away on Saturday, November 26, 2016 at Baton Rouge General Medical Center (Butterfly Wing) at the age of 83. John has fought the fight of cancer since December of 2015. He retired from Gulf States Utilities in 1994 with 39 years of service as a Utility Foreman. John was a United States Army Veteran and dearly loved his country. John was preceded in death by his parents Ramey and Viola Davis Kirkwood; his sisters, Lucille McDaniel, Rachel Stafford and Susie Lowry; brothers, Rean Russell Kirkwood, Haley Lee Kirkwood and Ramey Kirkwood, Jr. He is survived by his wife of 63 ½ years, Betty Jo Wales Kirkwood; two sons, Tim Kirkwood, Perry Kirkwood and daughter-in-law Karen Kirkwood; grandchildren Brittany Kirkwood Miers and her husband Tony Miers, Logan Kirkwood; great-grandchildren, Braylon Miers, Layla Kirkwood and Kylan Miers; sisters Minnie Lou Jackson, Vilean Boudreaux, Vida Longmire and a brother Ira Lane Kirkwood and numerous nieces and nephews. Pallbearers will be Perry Kirkwood, Logan Kirkwood, Tim Kirkwood, Tony Miers, Bill Lockwood, Gary McCain, Dennis McCain and Ronnie McCain. Family and friends are invited to attend the visitation which will be held at Greenoaks Funeral Home on Tuesday, November 29, 2016 from 9 am until funeral services begin at 12pm. Burial will follow in Greenoaks Memorial Park. In lieu of flowers the family asks that donations be made to Hospice of Baton Rouge (Butterfly Wing) in his memory.
Published by The Advocate from Nov. 27 to Nov. 29, 2016.
To plant trees in memory, please visit the Sympathy Store.
MEMORIAL EVENTS
To offer your sympathy during this difficult time, you can now have memorial trees planted in a National Forest in memory of your loved one.
Funeral services provided by:
Greenoaks Funeral Home
MAKE A DONATION
MEMORIES & CONDOLENCES
9 Entries
My condoliences to the Kirkwood family. It was a pleasure knowing Mr. John. Mrs. Betty Jo, Tim, and to the rest of the family, sorry for your loss. It's been an honour to me to have been able to have known Mr. John, and to know Mrs. Betty Jo. Such a nice family! God bless you all! Your friends, Pam and Hunter Collins
Pam Collins
December 4, 2016
Perry My prayers for you and your family.
November 29, 2016
Tim, We are so sorry for your loss. Unable to make the services. You and your family are in our thoughts and prayers.
Nancy & Chuck Junot
November 29, 2016
I hope God gives you comfort during this time of loss.I worked for and with John at GSU and know he will be truly missed.He was one of the good guys. My prayers are with you all.
November 28, 2016
TJ,

So sorry to hear of the loss of your father.

Thinking of you,
Terri Terrell Anderson
November 28, 2016
I have known the Kirkwoods for 58 years they were my neighbors and good friends. I will miss J.L. he was one of the finest man I knew My God bless his family and remember I love you'all very much Patsy Yglesias Morales
November 28, 2016
My prayers for the entire Kirkwood family. I met John and Betty at church, we were helping with a church mail out. There were many laughs around that table. John would sometimes bring his delicious peanut brittle. They were the sweetest and most loving couple. One can't help but love them both. I always loved seeing their smiling faces at church.

Betty, I know that John loved you and knew you loved him always. Prayers for comfort for you at this time.
Diana Griffin
November 27, 2016
May God's loving kindness comfort you and help you through this sad time Psalms 29:11
November 27, 2016
Ms. Betty and Family, I'm so sorry to hear about Mr. John, but know he is not hurting and he is with God. I will always remember him bringing me peppermints how thoughtful he was. May God Bless you and your family! Love, Dot Morris
Dot Morris
November 27, 2016
Showing 1 - 9 of 9 results