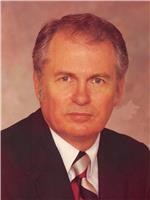 FUNERAL HOME
Resthaven Gardens of Memory & Funeral Home
11817 Jefferson Highway
Baton Rouge, LA
Kenneth Eli Osterberger "Ken," 86, a True Southern Gentleman, passed into the loving arms of Jesus on August 10, 2016, after suffering the devastating affects of Alzheimer's Disease. Survived by his wife, Harriet of 30 years, his son, Trey; son, Don Klung and wife, Robin, and children, Rachel and David of VA, son, Mike Klung and wife, Shanna; their children, Nicholas, Emily, and Madeline and her husband, Travis Wesley and their son, Kayden; daughter, Missy and husband, Richard Gingras and their children, Matthew, Michael and Andrew of East Lansing, Michigan. Preceded in death by former wife, Margaret Simmons and sister, Rosalind Poleman. Ken did not want us to mention his very long list of accomplishments, but we'll mention a few. He was president of the LSU student body from 1952 to 1953, and a member of Lambda Chi Alpha fraternity. He served during the Korean War as 2nd Lt. in the US Army 10th infantry division, a city councilman, and as Mayor Pro Tem for 8 years in the 1960s. Ken was local and state president of Jaycees, National Vice President of United States Jaycees and Jaycees International Senator, president of EBR State LSU alumni chapter and founder of the Louisiana Senate prayer breakfast. Ken was elected to the Louisiana State Senate in 1971, retiring from that office in 1991. Visitation will be held at Resthaven Gardens of Memory and Funeral Home, 11817 Jefferson Hwy., Baton Rouge, on Sunday, August 14, 2016, from 4:00 PM to 7:00 PM. Visitation will resume at 12:00 PM on Monday August 15, 2016, until funeral services at 2:00 PM, officiated by Pastor Garlin Mizell of Bethany. Burial will follow at Resthaven Gardens of Memory. In lieu of flowers, contributions may be made to St. Jude Children's Research Hospital, Bethany World Prayer Center or Carpenter House, 10615 Jefferson Hwy., Baton Rouge. The family wishes to extend a special thanks to the staff at Carpenter House. Family and friends may sign the online guest book or leave a personal note to the family at www.resthavenbatonrouge.com.
Published by The Advocate from Aug. 11 to Aug. 15, 2016.
To plant trees in memory, please visit the Sympathy Store.
MEMORIAL EVENTS
Aug
14
Visitation
4:00p.m. - 7:00p.m.
Resthaven Gardens of Memory & Funeral Home
11817 Jefferson Highway, Baton Rouge, LA
Aug
15
Visitation
12:00p.m. - 2:00p.m.
Resthaven Gardens of Memory & Funeral Home
11817 Jefferson Highway, Baton Rouge, LA
Aug
15
Funeral service
2:00p.m.
Resthaven Gardens of Memory & Funeral Home
11817 Jefferson Highway, Baton Rouge, LA
Aug
15
Burial
Resthaven Gardens of Memory
LA
Funeral services provided by:
Resthaven Gardens of Memory & Funeral Home
MAKE A DONATION
Please consider a donation as requested by the family.
MEMORIES & CONDOLENCES
8 Entries
He was a true gentleman who served the City of Baton Rouge above and beyond the expected.
JoeAnn Womack Stahel
August 14, 2016
As one of his former constituents, I wish to offer condolences to Ms. Harriet and family members. May God Bless all of you.
Sincerely, Clara Earl.
Clara Earl
August 13, 2016
Ken was a really great guy. An inspiration to us all. All the best to his family. Dwight Verdin,
President Baton Rouge Jaycees, 1977-1978
Dwight Verdin
August 13, 2016
I will miss my Uncle Ken very much. I know my mom Rosalind Poleman and my grandmother (Ida Mae) and my Aunt Margaret was waiting for you. May you rest in internal peace. I love you and will miss you very much.
Ken Poleman
August 12, 2016
Rest in peace to a good honest man. He always took care of his people who elected him to the Senate. God has opened his arms to welcome him in heaven.
Louise Angelle McCann
August 12, 2016
Ken was a wonderful man, always kind and such a great listener and story teller. We will miss you Ken but know that you are with our Lord Jesus. We are thinking of you Harriet during this hard time of letting go and missing him.
We are here for you Harriet.

Love, Steve and Liz,
Denise and Deb
August 12, 2016
Ken was a wonderful friend and we have missed him very much in recent years. We regret very much the suffering he had to go through. Our thoughts and prayers are with you Harriet and family during this difficult time. We won't be able to attend either the visitation or funeral because of our condition but you will all be in our thoughts and prayers.

Pat and Bill Bailey
Pat & Bill Bailey
August 12, 2016
Ken was a true treasure One of those gentlemen from a past generation. I don't think I ever met someone that didn't truly adored him for his kindness and sincerely. Harriet please know you are in my thoughts and prayers. I wish I could be there. When I do come to town I will come and visit. with youLove , Judy Harrison
Judy Harrison
August 11, 2016
Showing 1 - 8 of 8 results