Mary Elizabeth Briggs Norckauer
ABOUT
Baton Rouge High School
FUNERAL HOME
Rabenhorst Funeral Home & Crematory - Downtown
825 Government Street
Baton Rouge, LA
Mary Elizabeth Briggs Norckauer, a native and resident of Baton Rouge, passed away on April 2, 2021 at the age of 96. To her friends and family she was "Pud". Mary Elizabeth had an interesting life which touched many people and activities. She primarily considered herself an athlete and never married. She attended Dufrocq Elementary School, and graduated from both Baton Rouge High School and Louisiana State University with a Masters Degree. After college and the war she played for the Grand Rapids Chicks in the Women's Professional Baseball League. During her first teaching assignment in Port Arthur, TX, she learned to ice skate. While Holiday on Ice was touring in Houston, TX, she auditioned and was hired by them. For 10 years she went on to skate and choreograph all around the world before coming home to Baton Rouge. On her return she took a teaching position at Louisiana State University where she taught a wide variety of sports. For over three decades she taught everything from dance to skating to shooting (archery, rifle, pistol & shotgun) to fencing and survival, to name a few. She was the founder of the LSU Golden Girls and choreographed them for most of their first decade. During these years her personal shooting accomplishments placed her on the United States of America Shooting Team where she traveled internationally and earned the rank of Internationally Distinguished Shooter. In her senior years she focused on track and field and not only did she win, but she set many age group National and World Records in running, jumping and throwing events. She also participated in not so athletic activities like the Baton Rouge Little Theater. And, she supported many philanthropic activities. Whatever she focused on she practiced and trained to be the best. She was a great instructor, athlete, aunt and friend. She was preceded in death by her parents William Henry and Vida Gertrude McAtee Norckauer, and her brother Heber Regal Norckauer (Joyce). She is survived by her niece Christine Ann Norckauer Carroza (John) and nephews William Henry "Bill" Norckauer and Heber Regal "Butch" Norckauer, Jr. (Sheila) and their numerous children and grandchildren. Family and friends are invited to attend the visitation which will be held at Rabenhorst Funeral Home (Government Street) on April 7, 2021 from noon-1:30 pm. Funeral services will follow thereafter as will burial at Roselawn Memorial Park. Mary Elizabeth donated to a wide range of charities and the family asks that in lieu of flowers a donation be made in her name to your charity of choice.
Published by The Advocate from Apr. 3 to Apr. 7, 2021.
To plant trees in memory, please visit the Sympathy Store.
MEMORIAL EVENTS
Apr
7
Visitation
12:00p.m. - 1:30p.m.
Rabenhorst Funeral Home & Crematory - Downtown
825 Government Street, Baton Rouge, LA
Funeral services provided by:
Rabenhorst Funeral Home & Crematory - Downtown
MAKE A DONATION
Please consider a donation as requested by the family.
MEMORIES & CONDOLENCES
6 Entries
Mary Norckauer was my rifle coach back in the 70's. She was an awesome instructor and athlete her entire life. Truly a Louisiana & LSU legend. Rest in peace.
Steve LaFleur
September 16, 2021
I participated in rifle and pistol marksmanship at LSU. Miss Mary was my coach. She was stern, our workouts were strenuous and I was a better person for it. She asked me if I´d like to be an Olympian but I declined. I told her that I wanted to be a veterinarian instead. She approved of my academic discipline to get in and to get through the School of Veterinary Medicine (right across the road from where she practiced archery!) She asked me if I wanted to participate in summer biathlon but I declined. I told her that I wanted to train for bicycle racing instead. She didn´t discourage me(I´m still an avid cyclist and I´m sure that she´d be pleased of my performance level at 60 years old). She had me ride a morning time trial, she´d record my time, and then I had 9 rounds of target shooting and then off to school. The next day we´d analyze my grouping. She could recall from memory the fall of my shots, their order and the time between them. I told her in 1983 that I wanted to start a new sport of windsurfing and I don´t think that she approved! But she didn´t discourage me and nearly 40 years later I´m still windsurfing! I learned the importance of physical fitness, discipline, sportsmanship and academics from Miss Mary. I will always remember her.
Louis A Schwartz,DVM
School
July 8, 2021
WOW is all I can say. I was on the LSU Archery team 1976-1981 and shot many tournaments with her including many Pelican State Games that she ran. Had many wonderful memories of her, especially her laugh and smile. I felt honored when she asked me to officiate the Senior Olympics in BR in 2002.
Jon Kellis
Friend
April 7, 2021
Ms. Norckauer was a wonderful person and a great teacher. I was one of her students at LSU in 1984. She knew all of her students by name and wanted all of her students to do well. My Uncle Barney later informed me that he was related to her on his mother's side of the family. She had a amazing life from beginning to end. We are all better for having known her. May she rest in peace.
Doug Alford
Student
April 7, 2021
Rest in peace dear lady. We will always remember you. We always looked forward to hearing about your accomplishments.
Jamison Auto Service (Sheri & Roy)
Friend
April 5, 2021 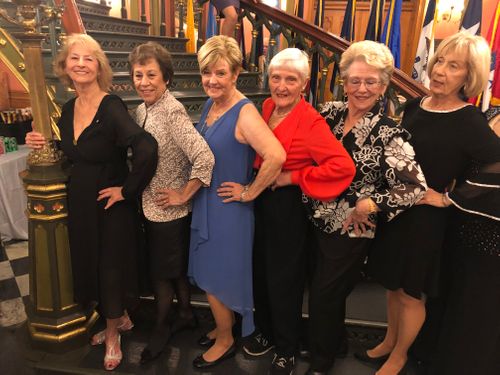 I am saddened to hear about Ms. Norckauer's passing. I had the privilege to be one of the original Golden Girls under Ms. Norckauer in 1959. I saw her last when we celebrated the 60th year reunion of the Golden Girls in 2019. She was a remarkable lady. She was as remarkable in 2019 at 95 as she was in 1959 when the line first began. At the reunion, a friend of mine offered to escort her to the elevator at the State Capital where the Gala was being held. Her reply was' "why would I take an elevator when they have these wonderful stairs." She will be missed.
Jo Ann Hamilton Davis
April 4, 2021
Showing 1 - 6 of 6 results