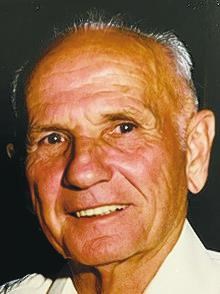 BORN
1925
DIED
2021
Milton Andrew Naquin passed away on Tuesday, October 12, 2021 at his home in Brusly, at the age of 96. He was a native of White Castle and resident of Brusly. He served his country in the United States Army and received a purple heart in WWII. He happily retired from Baton Rouge Marine Contractors after working as an accountant. After retiring you could find him caring for his loved ones or working in his yard. Visiting will be at St. John the Baptist Catholic Church in Brusly on Thursday, October 14, from 10 a.m. until Mass of Christian Burial at 11:30 a.m., celebrated by Rev. Matthew Lorrain. Entombment will follow in the church mausoleum. Milton is survived by his wife of 58 years, Marceline Thibodeaux Naquin; son, Milton Andrew "Andy" Naquin Jr.; one step-daughter, Carolyn Songy Galloway and husband Greg; three grandsons, Clayton Hebert and wife Dagmar; Richard Hebert Jr. and Steven Galloway and wife Regina; four great-grandchildren, Jack Hebert, Parker, Payton and Paige Galloway. Milton was preceded in death by his parents, Joseph O'Neil and Elizabeth Cedotal Naquin; step-daughter, Catherine "Fay" Songy Hebert; grandson, Kenneth Galloway; siblings, Mary Ann Navarre, Mary Lou Hernandez, Vannie Naquin, Wilson Naquin, O'Neil Naquin, Lucy Bourgeois and Una Ross. Milton was an active member of the Moose Lodge for several decades. He will be remembered as the backbone of the family and he will be greatly missed. Pallbearers will be Clayton, Jack and Richard Hebert Jr., Steven and Parker Galloway and Patrick Avants. Please share memories at www.wilbertservices.com.