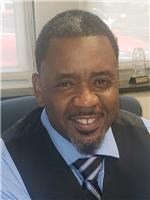 BORN
1968
DIED
2019
ABOUT
Glen Oaks Senior High SchoolIstrouma Magnet High
FUNERAL HOME
Charles Mackey Funeral Home
1576 Robin St.
Baton Rouge, LA
The steps of a good man are ordered by God: and He delighteth in his way. Psalm 37:23. Reginald Jack Douglas, a native of Baton Rouge born July 6, 1968, was a loving husband, father, son, brother, grandfather, uncle and friend. Reginald went to his eternal home on Saturday, August 24, 2019, at the age of 51. He was the only son of Jack and Doris Carney Douglas. Reginald accepted Christ at an early age. He was baptized in 1979 at the age of 11 by the late Reverend Morris Jackson at Little Zion Baptist Church, where he served faithfully as a young adult usher. As a young adult, he fellowshipped with several congregations where he always looked for an opportunity to serve the Body of Christ. Eventually, he became a member of Bethany World Prayer Center. In his Christian walk, he also established a close bond with Bishop Ronald Hardy of Faith, Hope and Love Worship Center. Reginald was a product of the East Baton Rouge School System, graduating from Glen Oaks High School in 1986. Soon after, he joined the U.S. Army where he served in Germany. After returning from military service, Reginald graduated from Southern University and A & M College with a Bachelor's Degree in Psychology. Later, he received a Master's Degree in Administration and Supervision from The University of Phoenix. At the time of death, he was working on a PhD in Educational Leadership from Capella University. Using his educational training and love for others to serve this current generation, Reginald pursued his passion for the academic and social advancement of young people. In doing so, he served as a distinguished educator in the classroom and as a coach. He was proud of the young people with whom he worked and trained. His field of influence as a coach and trainer extended to both Istrouma High School and the National AAU program. Beyond the classroom, football field and basketball court, Reginald impacted many young people who now credit him for helping them to better themselves. He began his teaching career at Istrouma High in 1999. He later became Dean of Students at Capitol High, Assistant Principal for Advance Charter School, and Principal at St. Helena High. At the time of his death, Reginald was serving as Principal of Istrouma High School. He leaves to cherish his memory his devoted wife of twenty-six years, Deidra McClinton Douglas; his mother, Doris Carney Douglas; four daughters: Rachael, Leah, Sarah, and Naomi Douglas; two grandsons: Demarion and Demazi Gray; two sisters, Regina and Jacquenette Douglas; two sisters-in-law: Danna Lloyd and Donna McClinton, both of New Orleans; father-in-law, Samuel McClinton (Ethel) of New Orleans; five aunts, Bessie Mae Douglas of Seattle, WA, Bobbie Brent-Cornish of New Orleans, Delores Robinson, Carolyn Carney and Beverly Thomas of Baton Rouge; godson, Ron Pennington, II; goddaughter, Alice Rankins Smith; and a host of nephews, nieces, cousins and friends. He was preceded in death by his father, Jack Douglas, his mother-in-law Betty Brent McClinton, and his grandparents. Funeral Services will be held Friday, August 30, 2019 at Bethany Church 13855 Plank Rd. Visitation from 8:00 a.m. until religious services at 10:00 a.m. Entombment Heavenly Gates Mausoleum. Professional Services entrusted to Charles Mackey Funeral Home 1576 Robin Street, Baton Rouge, Louisiana.
Published by The Advocate from Aug. 28 to Aug. 30, 2019.
To plant trees in memory, please visit the Sympathy Store.
MEMORIAL EVENTS
Aug
30
Visitation
8:00a.m. - 10:00a.m.
Bethany Church
13855 Plank Rd., LA
Aug
30
Funeral service
10:00a.m.
Bethany Church
13855 Plank Rd., LA
Funeral services provided by:
Charles Mackey Funeral Home
MAKE A DONATION
MEMORIES & CONDOLENCES
39 Entries
To the family of Principal Reginald Douglas, Mr Douglas is gravely missed by the entire Istrouma family. The love and care he showed toward each student was unsurpassed. He will never be forgotten and Istrouma Middle/High School will only experience that type of loyalty and dedication one in a life time.
Helen and Synya Spikes Travis
Student
August 31, 2020
To Doris, Regina, Deidra, and the Girls;

Words are insufficient at a time like this; how can one express the depth of grief, sorrow, and bewilderment at the passing of such an awesome and amazing person as Reginald?

Doris, you and Jack raised both your children in the fear and admiration of the Lord. His entire life is a testament to the Lord's goodness and mercy. He is the epitome of a good man whose steps were directed and ordered by God. He loved God and allowed his love of God to be reflected in ALL his actions. Truly his good works live on and will continue to live on for years to come. He left a lasting impression on all that were privileged to know him.

Deidra, God blessed you with a husband that most women only dream about---he loved you for a lifetime!!!! To me, you guys were the perfect fit; the girls are the evidence of the great love you shared. Yes, you will cry and miss him....but know that he LIVES eternally. He is absent from his earthly home but forever present with the Lord Jesus Christ.

Family Friend and Sister in Christ,
Bernadette McLaurin
September 5, 2019
May God continue to comfort you in your time of bereavement
Sandra Anthony Grimes
September 5, 2019
Reggie your going to be missed. Rest In Peace my brother!
No more pain, no mor sorrow
Darlene Wellington-Union
September 4, 2019
With Deepest Sympathy
East Baton Rouge Parish School System
August 31, 2019
May God comfort you during your time of bereavement. (IHS Class of 1997)
Demetric Alexander
August 30, 2019
I enjoyed working with you as your secretary. The time, care and encouragement you gave to the students, faculty and staff at St. Helena College and Career Academy in Greensburg was an inspiration to everyone. May God's strength and peace be with your family during this time as I know you are with Him now watching over all of us.
Trish Clark
Coworker
August 30, 2019
Celebrating a life well lived. We will cherish the memories forever.
Marvin and Maxwell Jackson and Family
August 30, 2019
May God bless you and your family in this time of sorrow.
Shalindria Michelle Thomas and Family
August 30, 2019
It can be so hard to face the first year without your loved one, but the love of family and friends can carry you through.
Elaine Pounds Thomas and Family
August 30, 2019
The school and community will miss you, Mr. Douglas. May God's peace comfort the family.
Amanda Weary
Acquaintance
August 30, 2019
Family,
With heartfelt compassion, praying for you'll.
Rose Carey
August 30, 2019
Our hearts are full for you during your time of loss. May God's peace and love comfort you and the girls during this time. We love you and are here for you.
Celia, Herbert, & Raven Alexander
Celia Alexander
August 30, 2019
May God bless you and your family in this time of sorrow.
August 30, 2019
Rest in Paradise Coach Douglas, You made such a significant impact in the lives of so many students who really needed what you imparted in them. Istrouma High greatly appreciates your greatness ✝ God bless the family!
Angela Thompson
August 30, 2019
we are sorry for your lose. Reginald was a good brother. we are going to keep the family in our prayers.
Carlos Winey
August 30, 2019
With deepest sympathy.......
Sherita Lolis
August 30, 2019
To the Douglas' Family
Sending our deepest sympathy during this difficult time in your lives. May you find peace in the God of all, and look to Him for your strengthen and endurance during this difficult loss of your love one.
Joan & Charles Bell
Little Zion BC
Joan Bell
August 29, 2019
With deepest sympathy to the family. Mr. Douglas truly showed the steps of a good man in his daily communication with staff, students and parents of Istrouma High/Middle Magnet School. He is truly missed.
Helen Travis
August 29, 2019
My deepest sympathy from Dernishia Addison Williams istrouma class of 1995 my prayers are with his family and too my istrouma family he was a great and understanding man his love with istrouma will be truly miss r.i.p Mr Douglas
Dernishia Williams
August 29, 2019
Sending love and prayers to the family; his words and wisdom will forever carry through his students
Kandace Lafleur
August 29, 2019
To Deidra and family: Remember the good times and cherish the memories. May he Rest In Peace.
Dorothy Vernon Green
August 29, 2019
My deepest sympathy, thoughts and prayers to Mr. Douglas Family. In loving memory of a wonderful person. You will always live in our hearts and prayers. You are truly missed.
Ashley Grant
August 29, 2019
Ashley Grant
August 29, 2019
To The Douglas Family:

We the former Prescott Middle School students are sending our love and our prayers to each of you. Mr. Douglas you will be missed, but your words will never be forgotten.

Love,
Prescott Middle School Students
Deirdre Moore
August 29, 2019
Praying for the family. IHS c/o 95
Michelle Yates-Harris
August 29, 2019
With deepest sympathy, may God strengthen your family. From Mentorship Steam Academy Staff
Tressella Thomas
August 29, 2019
My most heartfelt condolences for the Douglas family and the Istrouma family. Mr. Douglas, you were a servant leader to many. Your example will live on in the many lives that you touched. Rest in peace.
Damian Gordon
August 29, 2019
My thoughts and prayers are with the family. I'm asking that GOD grant you the peace that surpasses all understanding at this time. May Reginald live on in your hearts and minds.
~Former coworker/Fellow colleague
Dr. Vickie Auguste, Ed.D.
August 29, 2019
Our condolences to the Family, praying
Marilyn Langham
August 29, 2019
My condolences to the family and the Istrouma High School family as well. I had the pleasure of meeting Mr. Douglas at Advanced Charter School as an Assistant Principal. He was always very nice and a pleasure to be around. He will truly be missed.
Lafleur Family
August 29, 2019
My thoughts and prayers for the Douglas Family.
Chauncey Moore
August 29, 2019
My condolences to the family and entire Istrouma High family. I had the pleasure of working with Mr. Douglas at Capitol High. He was truly a nice person that will be truly missed.
Janice Byrd
August 29, 2019
To the family of Mr. Reginald Douglas we give you our condolences to you through difficult time. May God strengthen you and your family . Rest in PARADISE Mr. Reginald Douglas. Farewell Gone but not Forgotten. From shaunderia Nelson one of his students from Istrouma High and family.
Sandy Nelson
August 29, 2019
With deepest sympathy. Rest on my friend. GOHS '86
Jacqueline Briggs
August 29, 2019
MY thoughts and prayers are with you and your family during this time. I pray that God will continue to be the lifter of your head. Trust and lean on God for he cares for you. Continue to be encourage.
Mr. Brumfield (Istrouma High)
Coeman Brumfield
August 29, 2019
We will miss you. GOHS 1985
Kathy Gilmore
August 29, 2019
With Deepest Sympathy, May the peace of God comfort the Douglas Family.
Parnice Clark, GOHS
August 28, 2019
To The Family of my Friend Reginald Douglas. You are forever in prayers. Reginald and I grew up in the St Pius Neighborhood from Sharon Hills Elementary to Glen Oaks High to Southern University. Thanks Reginald for being a lifelong Friend and Brother Joseph P. Lewis Glen Oaks High Class of 1987.
Joseph Lewis
August 28, 2019
Showing 1 - 39 of 39 results