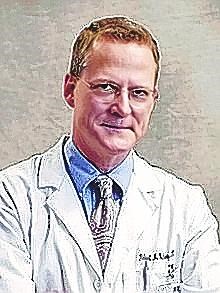 FUNERAL HOME
Thomas McAfee Funeral Home
639 North Main Street
Greenville, SC
Robert McIntire Richey, MD, age 64, of Simpsonville, SC, husband of Cindy Farrar Richey, passed away Friday, October 15, 2021 at Prisma Health Hillcrest Hospital in Simpsonville. Born in Ferriday, LA, he was the son of the late Verne and Johnnie McIntire Richey. He was a graduate of Ferriday High School, where he was a track and basketball letterman, honor graduate, and served as a Key Club International trustee. Bob was a graduate of Louisiana State University, where he served as Student Body President from 1978-1979. He was a graduate of Tulane University Medical School, where he received the Owl Club Award (Outstanding Tulane Intern). Bob completed his residency at University of South Carolina Medical School, Columbia, SC, where he was Chief Resident from 1991-1992. His love for the Lord and his family were superior. As a Board-Certified Physician of Internal Medicine in 1992, Bob loved practicing medicine. He had a genuine passion of caring for his patients. He practiced for eight years in DeQuincy, LA and twenty years in Florence, SC. At the time of his passing, he was a practicing physician with Prisma Health. In his spare time, he enjoyed vegetable gardening. He is survived by wife Cindy Richey; sons, Thomas Farrar Richey (Amal), Robert "Bob" McIntire Richey, Jr. (Jessica), John Alexander Richey (Eliza); three grandchildren, Caroline Farrar Richey, Audrey Gabrielle Richey, Robert McIntire Richey, III, "Mac", and soon-to-be born Jacks Richey; brothers, John V. Richey, MD of Ferriday, LA, Thomas H. Richey, MD of Zachary, LA and Daniel W. Richey, JD of Baton Rouge, LA. In addition to his parents, he was preceded in death by his sister, Catherine A. Richey Devall. A Graveside Service will be held on Sunday, October 17, 2021, at 4:00 p.m. at Cannon Memorial Park. Burial will be in Cannon Memorial Park. In lieu of flowers, memorials may be made to St. Jude Children's Research Hospital, 262 Danny Thomas Place, Memphis, TN 38105. Condolences may be left for the family by visiting www.thomasmcafee.com.

Published by The Advocate from Oct. 16 to Oct. 17, 2021.
To plant trees in memory, please visit the Sympathy Store.
MEMORIAL EVENTS
Oct
17
Graveside service
4:00p.m.
Cannon Memorial Park
SC
Funeral services provided by:
Thomas McAfee Funeral Home
MAKE A DONATION
Please consider a donation as requested by the family.
MEMORIES & CONDOLENCES
23 Entries
Cindy so very sorry to hear of Dr. Ritchie's passing. I will never forget him and the wonderful care he gave my Mother (Opal Spears) of DeQuincy during her illness and death.
Billie Spears Arnold
November 10, 2021
So sorry for your loss. I really liked Dr. Richey. He had a real caring and gentleness about him. Prayers for the family.
Brenda Bryant
October 22, 2021
Dr. Richey, was the kind of doctor who was a friend. He was always there for me and cared for all. He will be missed. Condolences to his Family.
Karen Hatchell Crawford
October 21, 2021
We are so very sorry to hear of Dr. Richey's passing. He was our family Dr for several years in Florence. Our thoughts and prayers are with the family.
Richie & Janet Porter
Other
October 20, 2021
Dear Cindy, Our family is grieving with you and your family. He was a great doctor and will be missed by all who knew him. We thought of him as a member of our family, and he treated each of us like one. Love and prayers, Alberta Smith 3010 E National Cemetery Road Florence SC 29506 843-669-1326
Alberta Smith
October 20, 2021
You are my favorite physi cian last time I saw you at Schofield hardware telling me you wanted to ride my motorcycle man I'm going to miss you
Chief Billy Brown
October 19, 2021
So sad to hear this news. He truly was a good doctor. And he could always make me laugh. My heartfelt condolences to all his family. God bless you all.
Linda O'Neal
Work
October 18, 2021
Dr. Richey will be truly missed. We first met Dr. Richey as being a member of the Florence Baptist Temple. He was such a great christian person and friend, that shortly after he became our family doctor. We loved him so much and will be greatly missed.
Gregory and Jannette Brown
Other
October 18, 2021
My sympathy´s to the family! I so enjoyed getting to know Dr Richey as a pharma rep we had may adventures and great talks
David Rast Florence
Friend
October 18, 2021
Dr. Richey mine and my husbands doctor when he was in Florence, SC. He was a great doctor. Carl and I both thought alot of him. I called him about a month ago and figured he wouldn't get the message or call me back, but he did. I'm so glad I got to talk with him that day. Praying for his family and friends.
Paige Pate
Other
October 18, 2021
Dr Richey was a special person. He cared so much he was so good to my husband. I worked with him and learned a lot. I was to go see Bob coach he was so proud of his children and grandchildren. He talked about them frequently. You are all in my prayers.
Deborah Crider
October 18, 2021
Heartfelt condolences.
Jerry Gibson
October 18, 2021
This is certainly sad news. Dr. Richey was the best doctor I ever had. He served me, my wife Virginia and our son Robbie. Always enjoyed his articles in the "Golden Life" paper - 'How to live to be 100'. He sure helped me on that quest, I've just reached 85. Also remember his being a part of the annual 'Singing Christmas Tree' at the Baptist Temple in Florence. He was truly a blessing.
Dan McNeill, Florence
Work
October 17, 2021
So very sorry for your loss. Dr. Richey was one of the best. Prayers for comfort and peace for his family.
Renee Parrott
Other
October 17, 2021
Such a loss to medicine! His approach to long term care lives on in those of us he so eagerly taught so much. Prayers for his family and all those touched by his unique personality. Blessed to have known Bob Richey!
Dana Jones
Work
October 17, 2021
May your hearts soon be filled with wonderful memories of joyful times together as you celebrate a life well lived.
Pam Burgess
October 17, 2021
Our precious friend and wonderful physician. He cared so beautifully for our physical and spiritual health. Our love and prayers for extra measures of comfort and peace for Cindy and dear family.
suzq Bridgers
Friend
October 17, 2021
I'm so sorry to hear about Dr Richey passing. He was my favorite Doctor. I hated to see him move away from Florence . Sending my condolences to a wonderful caring man.
Carla Anderson
October 17, 2021
I worked with Dr. Richey for many years in Florence. He was fun to be around and was so smart. A great teacher and physician. I learned a lot from him. It was a big loss for Florence when he left . RIP Dr. Richey.
Sue Whaley
October 16, 2021
Dr. Richey had a kind and gentle spirit. Our prayers are with you.
Angela Grace Slaughter
Work
October 16, 2021
So sorry. He was a wonderful physician. He will truly be missed!! Praying the Lord brings you comfort and healing during this time.
Barbara Kasack
October 16, 2021
So very sorry to read this. Praying for comfort for his family . Such a great physician.
Tammy Broach- Florence SC
October 16, 2021
Tommy and family - While Tommy is the only member of the family i knew, I would like to offer all members of the family my condolences on the loss of your loved one.
Kirk A. Hayes, M.D.
October 16, 2021
Showing 1 - 23 of 23 results