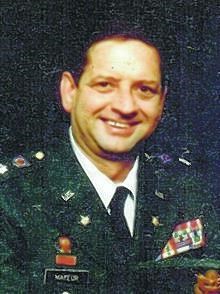 FUNERAL HOME
Edmond Fahey Funeral Home Inc
110 Necaise Ave
Bay Saint Louis, MS
Russell A. Mayeur, Jr, 75, of Diamondhead, MS, passed away Tuesday, August 31, 2021 in Diamondhead, MS. He was a wonderful son, brother, husband, father and grandfather who will be sadly missed by his family and friends. Russell graduated from Chalmette High School, Class of 1964. He was an active member of Boy Scout Troop 3 earning his Eagle Scout Award. Russell enlisted in the Louisiana National Guard at 17 and faithfully served his country for 31 years in both the National Guard and the US Army Reserve reaching the rank of Lieutenant Colonel. He began his career in the 1-141st Field Artillery Battalion, Jackson Barracks. He was mobilized and deployed during Operation Desert Storm. He spent 18 months deployed in Saudi Arabi. In civilian life, he worked with his father in the Russell A Mayeur and Sons, Inc, a roofing and sheet metal business. Later in life, he worked in retail at Wal-Mart and Big Lots. He finally retired completely to play golf at the Diamondhead Country Club. He was a member of the Washington Artillery Veterans Association and held various positions within the organization. He was a life member of VFW Post 2880, Diamondhead, MS where he had been a Past Commander of this post. He was preceded in death by his father, Russell A. Mayeur, Sr. and his wife, Judith A. Mayeur. He is survived by his mother, Eloise Kelly Mayeur, three sisters, Ellen McCubbin (Terry), Eloise Carboni (Lou), and Kelly Feraud (Darryl), one brother, Kerry Mayeur (Heather); two sons, Russell A. Mayeur, III (Stacey), Wayne Carriker (Sherry), three daughters; LaDenna Piper (Walter), Andrea Williams (Carl) and Elizabeth Hasselgren (Dustin); twelve grandchildren, Meghean, Joseph, Russell IV, Mason, Brian, Katelyn, Madi, Payton, Liberty, Noah, Leah and Cayden; two great grandchildren, Brooks and Marceline. In lieu of flowers, the family requests donations be made to the Jackson Barracks Museum, 6400 Saint Claude Ave, New Orleans, LA 70117. Services will be held on Friday, October 8, 2021 at 12:00 noon at St. Margaret Mary Church, 1050B Robert Road, Slidell LA 70458. Father Patrick Mockler will preside. Interment to follow at 1:30 p.m. at SE Veterans Cemetery, Slidell, LA. Edmond Fahey Funeral Home in Bay St. Louis, MS was in charge of the arrangements.

Published by The Advocate from Sep. 29 to Oct. 8, 2021.
To plant trees in memory, please visit the Sympathy Store.
MEMORIAL EVENTS
Oct
8
Service
12:00p.m.
St. Margaret Mary Church
1050B Robert Road, Slidell, LA
Oct
8
Interment
1:30p.m.
SE Veterans Cemetery
Slidell, LA
Funeral services provided by:
Edmond Fahey Funeral Home Inc
MAKE A DONATION
MEMORIES & CONDOLENCES
4 Entries
Oh Ellen, I´m so very sorry to read of Rusty´s passing. Please extend my sincere condolences to Miss Eloise , you and the entire Mayeur family.
Sheryleen Grothus
Friend
October 5, 2021
Kelly, my deepest sympathies for the loss of your dear brother. May his memory be a blessing. Love, Lisa
Lisa Stolier
Other
October 5, 2021
Eloise, I'm So Sorry to hear about the Passing of your Brother! Please give my condolences to your Mother & Family! I never knew Your Brother but I can tell He was as Good of a Man as they came! R.I.P. Russell.... Clifton Melerine
Clifton A. Melerine Sr.
Friend
October 4, 2021
What can I say! Rusty was a wonderful big brother & I have great memories of growing up with him. He was the one who taught me how to drive while we lived in Jackson Barracks. He will be missed greatly by everyone. Love, Ellen & Terry
Terry & Ellen Mayeur McCubbin
Family
September 30, 2021
Showing 1 - 4 of 4 results