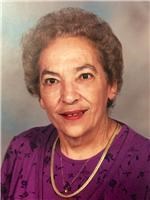 FUNERAL HOME
Baker Funeral Home
6401 Groom Road
Baker, LA
A resident of Baker, and native of Baton Rouge, Louisiana, Shirley passed away at 8:20pm on Saturday, October 18, 2014 at her home, with family by her side. She was 79 years old and enjoyed going to the Baker Council on Aging, where she made many friends, played Bingo and Nintendo Wii Bowling. She was a former board member of GSU / BR Sideliners, and a 1952 graduate of Saint Joseph Academy. Visitation at Baker Funeral Home, 6401 Groom Road, Baker, on Thursday, October 23, from 5pm to 9pm. Visitation continues at St. Isidore the Farmer Catholic Church, 5657 Thomas Road (corner of Plank Rd. and Thomas Rd.), on Friday, October 24, from 9:00am until Mass of Christian Burial at 10:00am, celebrated by the Rev. Frank Bass. Interment to follow in Hillcrest Memorial Gardens, Baker. Shirley is survived by three sons and daughters-in-law; Daryl and Barbara Chaney, Curtis and Linda Chaney, and D. Brent Chaney and fiancee' Tiffany; former daughter-in-law, Shelley Chaney; a daughter and son-in-law, Beth and Paul Alleman; 10 grandchildren, Michelle Manix, Brooke Chaney, Jamey Chaney, Chris Chaney, Andrew Chaney, David Chaney, Sean Chaney, Heather Alleman, Samantha Alleman, and Cody Alleman; five great-grandchildren, Hunter Manix, Carson Manix, Adam Chaney, McKenzie Orillion, and Sofia Chaney; and a brother, Lynn J. Landry Jr. and wife Jan. Shirley was preceded in death by her husband, Theodore "Boone" Chaney; parents, Lynn Joseph Landry Sr. and Mary Rita Cline Landry; a sister, Beverly Rita Landry Simoneaux; and an infant grandchild, Michael Chaney. Pallbearers will be her grandsons, Jamey, Chris, Andrew, David, Sean and Cody. The family would like to thank her caregivers, OLOL, St. Claire's Skilled Nursing Unit, and St. Joseph Hospice. Memorial donations may be made to St. Joseph Hospice, 10615 Jefferson Hwy., Baton Rouge, LA 70809. Please sign the online guestbook at http://www.bakerfuneralhomeonline. com/.
Published by The Advocate from Oct. 20 to Oct. 23, 2014.
To plant trees in memory, please visit the Sympathy Store.
MEMORIAL EVENTS
To offer your sympathy during this difficult time, you can now have memorial trees planted in a National Forest in memory of your loved one.
Funeral services provided by:
Baker Funeral Home
MAKE A DONATION
MEMORIES & CONDOLENCES
12 Entries
Beth and Boys,
I am so sorry I could not make the wake or funeral.......My thoughts and prayers are with all of you
Stellie Cline
October 24, 2014
Lynn & Jan
My condolences extend to you also. My prefernce had been to phone you, but don't have a contact number.
(Aunt Euna's g/daughter)
Mary Davros
October 23, 2014
We were so sorry to hear Shirley passed. We were hoping to come see every-body in Nov. after Cleo gets his eye's fixed. We will be praying for you all and God be with you. Love, Aunt Rosie and Uncle Cleo
October 22, 2014
Ms.Beth, my thoughts and prayers are with you and your family. Ms. Chaney was such a sweet lady and she will always be remembered.
Kye
October 22, 2014
Curtis and Family, so sorry to hear of your Mother's passing.
Laurie (Durr) Masichuk
October 22, 2014
So sorry to hear Ms Chaney has passed. God be with all of her family during this time.

Sandy Michelli Singleton (Denton, TX)
October 20, 2014
I will miss you NeNe, but I know you are not hurting anymore. May you Rest in Peace in our Lord's House. We love you.
Dottie Monistere
October 20, 2014
You will be missed, Remembering all the good times the 4 of us had. .
My thoughts and prayers are with you and your family...
Jim & Shirley Gerald
October 20, 2014
I lost my best friend, loved her so much we had such great times together.
Ruby Loupe
October 20, 2014
Fond memories of your Mom and Grandmother remain despite the many years that have elapsed since we last visited. Shirley Mae and my Mom were first cousins, daughters of Aunt Rita and Aunt Euna. Her animated spirit and distinctive voice captured my attention whether we met at one of the Cline sisters' homes or at the False River Camp. If memory serves me well, my late Mom was privileged to serve as Shirley Mae's Godmother. May God bless and comfort each of you.
Mary Davros
October 20, 2014
My prayers are with your family at this time. Ms. Shirley was such a sweet lady.
darlene ainsworth
October 20, 2014
My thoughts and prayers are with you.
May you be blessed with comfort and peace during this sorrowful time.
Kitty Thomas
October 20, 2014
Showing 1 - 12 of 12 results