T.R. Ritchie passed on from this world on Jan. 29, 2014, in Bellingham, Wash. He will be missed by the many who loved him and loved his music. He was attended by his partner, Tracy Spring, and friend, Albert Snow. He is survived by his siblings, Ann Meyers, Ken Dye and Vicki Chase, and many nephews and nieces, including Melanie Pouland, Rachel Nicks and AnnDee McGlory.
T.R. was born in Olympia, Washington on Dec. 29, 1946. His parents moved back to Kansas soon after his birth and he spent most of his growing years in Blackwell, Oklahoma.
T.R. was a self-taught musician; he bought his first guitar while studying journalism in college, wrote his first songs, and never looked back.
For several years he divided his time learning his craft while working seasonally for the U.S. Forest Service as a firefighter and, later, a fire lookout in the mountains of northeastern Oregon. He eventually settled in the Northwest, and in the late '70s busked on the streets of Seattle's Pike Street Market while writing the songs that would eventually become his first recording, "Not Just Another Pretty Songwriter," a cassette-only album (later released on CD) that nonetheless caught the ear of regional music critics.
In 1983, T.R. was one of two-dozen songwriters featured on a regionally best-selling compilation album produced by radio station KEZX-FM, and he soon began to tour further afield. His second recording, "Changing Of The Guard," followed, and with it his first national tour.
In 1994, T.R. moved to the canyon country of southeast Utah. He continued to tour nationally, both as a solo artist and in support of longtime partner Cosy Sheridan. In 2008 they co-founded the Moab Folk Camp, a week-long series of music workshops held in conjunction with the Moab Folk Festival.
In September of 2012 he returned to the Pacific Northwest to concentrate on his solo career.
T.R.'s songwriting awards and accolades are many: a two-time finalist at the Kerrville Folk Festival's New Folk contest; top honors from the Napa Valley (Calif.), Sisters (Ore.) and Jubilee (Colo.) Folk Festival songwriting competitions; the only double-showcase songwriter in 2001 and again in 2005 at the Walnut Valley Festival's New Artist Showcase in Kansas, and a 2005 finalist at the Mountain Stage Newsong Festival.
His CD discography includes "Not Just Another Pretty Songwriter" in 1984; "Changing of the Guard" in 1990, "Homeground" in 1995; "My Father's Wildest Dream" in 2001 and "Wild Horses" in 2009, as well as a book of poems, "Works On Paper" in 2011.
Eleven days before T.R. passed, musician friends from all over the country drove and flew into Bellingham for a very powerful T.R. Ritchie concert, in which some favorite T.R.'s songs were sung back to him. It was a stunning performance. He enjoyed it immensely, and was a wonderful tribute to not only T.R.'s great art, but also to the strong connections he had forged in the music community and beyond. It was deeply moving, and we are so glad we were able to sing and play for him that night. We know he heard us loud and clear.
On Sunday, February 9th from 6-9pm, in the Fairhaven Library, we will gather in his honor once again to share food and swap some tunes. Please visit the "Love for T.R. Ritchie" facebook page for more information. As T.R. might say, "doesn't get much better than that."
A fund in T.R.'s memory has been set up at the Moab Folk Camp: the T.R. Ritchie Memorial Fund. Memoriams can be made to the office of the Moab Folk Festival, P.O. Box 1082, Moab UT 84532.

death looks like the old horse packer
i worked with in Montana who taught me
how to balance the load and
throw a tight hitch so nothing came loose
crossing those high steep passes
on rough trails.

death looks like the short order cook
in that all night joint on First Avenue
back in seventy-three who said to everyone who
sat down at the counter, mister, you look
hungry. what'll it be?

death looks like my mother, six years old,
squinting at the camera in the winter sun
wearing her favorite red hat and mittens,
the family dog gazing up into her face
like she was the center of the universe

death looks like my big brother
who let me win at checkers sometimes
and taught me how to ride a bicycle.

I know that guy.
we've been friends all my life.
If I'm not wrong we'll be
swapping tunes for years to come.
doesn't get much better than that.

Published by The Advocate on Feb. 9, 2014.
To plant trees in memory, please visit the Sympathy Store.
MEMORIAL EVENTS
To offer your sympathy during this difficult time, you can now have memorial trees planted in a National Forest in memory of your loved one.
MAKE A DONATION
MEMORIES & CONDOLENCES
7 Entries 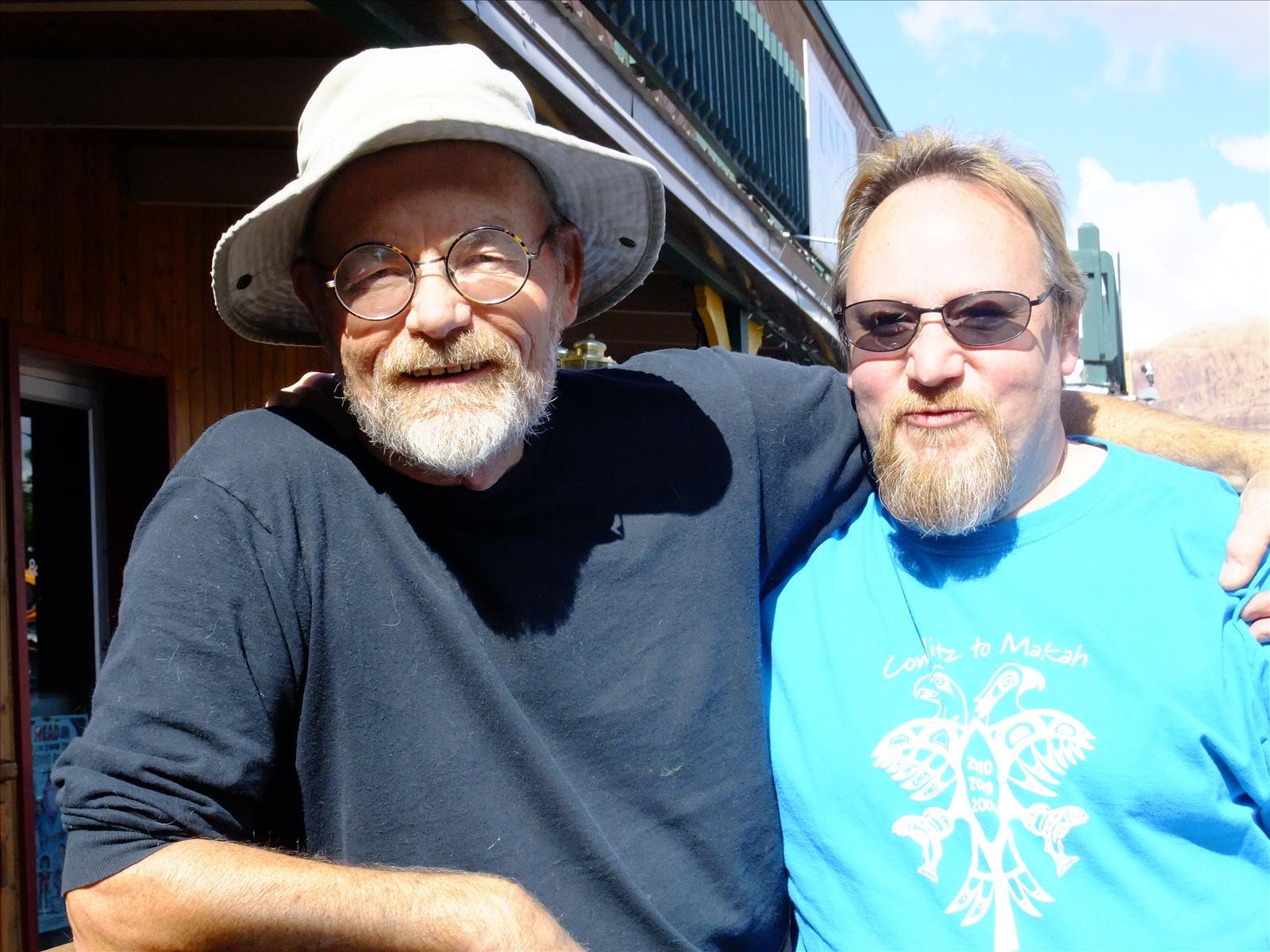 Sigh...I was just thinking of TR this morning & learned of his passing online. We had marvelous times together in Seattle in the '80s & I was overjoyed to reconnect with him in Moab in 2010. A marvelous talent who will not be forgotten.
Gregg
February 21, 2014
I met T.R. Ritchie when he performed several times in concert at Front Porch Music in Valparaiso, IN. What a treasure he was! Many of his songs are among my all time favorites. My prayers & thoughts are with his family and dear friends.

--Jane Schreiner
February 20, 2014
We will miss you Uncle Ritchie. Thank you for everything and enjoy your next journey.
Melanie Pouland
February 19, 2014
Will always have fond memories of you as a cute little boy running down a dirt road at the farm. Love you, Sug
Karla Golden
February 16, 2014
Philosopher and poet, artist through and through. We will always miss you.
John and Jane Titland
February 16, 2014
Our hearts hurt and our minds are numb at the loss of one of the good ones. Yet we know T.R.'s light will shine on in all who knew him.
Jeanne & John Combo
February 16, 2014
wow. i did not know t.r. ritchie very well, but was good friends with tracy spring years ago.. so very very sorry for this wonderful man's passing.... his music surely will live on forever... and his story brings memories to me of another musician's passing. that one of phyl sheridan who i knew in the 70's in seattle.. long ago, but another type of street musician. who changed my life a bit. .. sending so much good ju ju and LOVE and deepest words of sympathy to tracy and family.... much much love, mary ann dupree and family
mary ann dupree
February 16, 2014
Showing 1 - 7 of 7 results