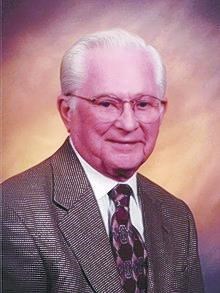 BORN
1920
DIED
2021
Thomas A. Oswald, Sr. passed away on November 17 at St. James Place in Baton Rouge. He was born in Chicago in 1920 to Thomas and Edna Bauer Oswald. One of the Greatest Generation, he volunteered for the Army while at the University of Illinois in 1942. He was selected to attend Officer Candidate School and was a specialist in ordnance. While training infantry recruits in Mississippi he met Martha Brown in Jackson, and they were married there in 1945. He was discharged from the Army in 1946 as a First Lieutenant. He retired early from the Chicago branch of Duo-Fast Corp. where he was president. Thomas is survived by his sons, Thomas, and John (Annette Thomas), his grandchildren-whom he was especially proud of -John (Stephanie Zito), Tanya, Jennifer, Thomas, and John Paul, and his great-grandchildren, Sophia, Lillian, Hayden, and Wyatt. He was married to Margaret Z. Fiandt in 2002, until her death in 2016, and is survived by a true and faithful friend, Mary Larson. A private graveside service will be held in the rural cemetery in Mississippi next to Martha, time to be determined. Memorials may be sent to Habitat for Humanity, 6554 Florida Blvd #200, Baton Rouge, LA 70806. The family is particularly appreciative of the kindness and care of the staff at St. James Place, Health and Wellness, third floor.

Published by The Advocate from Nov. 19 to Nov. 21, 2021.
To plant trees in memory, please visit the Sympathy Store.
MEMORIAL EVENTS
To offer your sympathy during this difficult time, you can now have memorial trees planted in a National Forest in memory of your loved one.
MAKE A DONATION
Please consider a donation as requested by the family.
MEMORIES & CONDOLENCES
0 Entries
Be the first to post a memory or condolences.