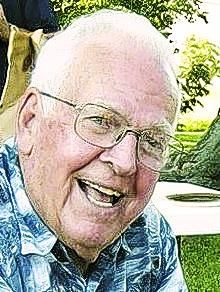 FUNERAL HOME
Ourso Funeral Home
13533 Airline Highway
Gonzales, LA
A resident of Dutchtown and native of Carville, Thomas Adrian Wintz passed away at Ollie Steele Burden on Thursday, September 30, 2021. Adrian was 95 and an avid fisherman who enjoyed frying fish for family and friends. He never passed up an opportunity to play a game of poker which he did monthly for many years as a member of the "River Brat" Poker Club. Purple and Gold ran through his veins, and when he wasn't following his football tigers, he could be found on his lawnmower cutting grass or in his flower beds pulling weeds. He was a yard enthusiast and was more than willing to share his knowledge as well as his plants with anyone who stopped by. He graduated from St. Gabriel High School in 1942 at the young age of 15. In the fall of that same year, after turning 16, he began pursuing a career in Electrical Engineering at Louisiana State University where he was a member of the ROTC. After 2 years, he decided to enlist in the military to avoid being drafted. Following in his older brother Landry's footsteps, he joined the Navy in September 1944. During his military training, he attended electrical school, then served as an electrician in the engine room aboard the USS Leon, originally a stock ship converted to an attack transport vessel, during World War II. He was honorably discharged at the rank of Electrician's Mate Third Class (EM3C) in June 1946. Once back state side, he continued his studies at LSU eventually graduating as an electrical engineer in January 1949. In August of that same year, he married his sweetheart, Isabel Young. After moving numerous times in several years, they finally settled their family in Geismar. He was employed at the Gillis W. Long Hansen's Disease Center eventually retiring from there in January 1988 as the Buildings and Grounds Manager with 32 years of service with the federal government. He was a member of K of C Council #2657 and a parishioner of St. John the Evangelist Catholic Church, Prairieville, where he served as a money counter, lector, and eucharist minister for many years. He was a member of the original building committee which oversaw the design and construction of the current worship space after the wooden church was destroyed by fire in 1968. He is survived by his daughters, Susanne Wintz and Jean Wintz Kling (CJ Jr.); sons, Thomas Adrian Wintz, Jr., (Valerie Flynn) and Randy Charles Wintz (Linda); grandchildren, Daphne Wintz Arnould, Rachel Wintz Beck, Jeffery Paul Wintz, Brad Charles Wintz, Lindsey Wintz LeBlanc, Jenna Marie Kling, Jorja Ann Kling, Lucas Villa and David Villa; and great-grandchildren, Avery, Emery, Adrian, Evan, Evelynn Arayna, Dhiren, Sterling and Matthew. Preceded in death by his wife, Isabel Young Wintz; his parents, William Aloysius and Vivian Landry Wintz; grandson, Thomas Adrian Wintz, III; and great-granddaughter, Rya Mae Haynes. Visitation at Ourso Funeral Home, Gonzales, on Monday, October 11, from 8:30 - 10:30. Mass of Christian Burial at 11 a.m. at St. John the Evangelist Catholic Church, Prairieville, with the Rev. Ed Martin, celebrant. Interment in Prairieville Community Cemetery. The family would like to give special thanks to the staff at Pinnacle Home Health, especially Jennifer and Blake, for their years of caring and loving service. They would also like to thank Clarity Hospice of Baton Rouge for their compassionate care shown to Adrian over the past few months. To offer condolences to the family, please visit: http://www.oursofh.com/ . In lieu of flowers, donations may be made to Coastal Conservation Association Louisiana (CCAL) at: https://ccalouisiana.com/.