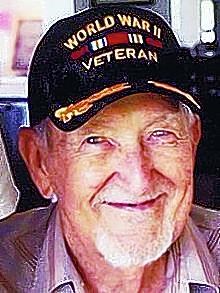 FUNERAL HOME
Harry McKneely & Son Funeral Homes & Crematory
2000 N Morrison Blvd
Hammond, LA
Walter Barzenick, 98, passed away peacefully, surrounded by family, on Monday, October 4, 2021 in Hammond, LA. He was born November 28, 1922 in Maywood, IL to the late Akzerina "Katie" Barzenick (Bocharnikov) and Alexander Barzenick (Bocharnikov) of Russia. In 1950, Walter moved to Hammond and began his 51 year teaching career at Southeastern Louisiana University. He had a full and beautiful life spanning almost 100 years. Walter was a humble man, deeply kind and generous, and he loved his family. Other than his black hat with the Third Armored Division patch, one may not have known of his brave service in WWII. In 1945, a mere 23 years old, he marched with his fellow infantrymen through the frozen fields of the Ardennes to fight in one of the most storied battles in military history, The Battle of the Bulge. Walter was wounded by a mortar strike and received the Purple Heart along with numerous medals and decorations. In 2015, he was bestowed with France's highest decoration, the Legion of Honor, for his contribution to the liberation of France from Nazi Germany. His music career is just as impressive as his military service. Walter received his Bachelor's and Master's degrees from Northwestern University in Evanston, IL where he studied with Domenic de Caprio. He studied on Martha's Vineyard with famed musician, Simeon Bellison, principal clarinetist of the New York Philharmonic Orchestra. Walter's lyric tone and sensitive musical ability was complimented in letters he received from his teachers. Walter was the principal clarinetist and appeared as a soloist with the Baton Rouge Symphony. He also appeared as a clinician, soloist, and adjudicator throughout the Southeast region. He authored a music booklet and was a beloved professor of many students who speak warmly of him to this very day. In the early 1950's, Walter, along with his friend and colleague, Tom Maddox, started and coached the Men's tennis team at SLU. He played an integral role in building the first clay tennis court on campus. Like music, tennis was a big part of Walter's life and in his last months at home, the television stayed tuned to the Tennis Channel. Walter was resilient and strong. The son of Russian immigrants, he survived the Great Depression, WWII, cancer, Hurricane Ida, and even the Coronavirus. He died of natural causes, on his own terms, at home. Walter is survived by his wife, Margaret Seifert Barzenick; daughter, Piper Barzenick (Rick Colucci); son, Jay Barzenick (Brenna); grandchildren, Jai-Li Colucci, Drew Barzenick, and Jay Barzenick, II; and niece, Lynn Carol Becker. In addition to his parents, Walter was preceded in death by his older sisters, Elizabeth Breickman and Tina Krebs. The family would like to thank Transitions Hospice, the VA, and his caregivers, Bernita, Angie, Cynthia, and numerous others. We are grateful. Relatives and friends are invited to attend the visitation for Walter outside the Parish Hall at Grace Memorial Episcopal Church, 100 W Church Street, Hammond, Louisiana 70401, on Friday, October 15, 2021, from 9:00 am until 9:55 am. A memorial service for Walter will be held in the Parish Hall, immediately following the visitation, beginning at 10:00 am. Interment will follow at Grace Memorial Episcopal Church Cemetery, Hammond, Louisiana. In lieu of flowers, donations can be made in Walter's honor to Grace Memorial Episcopal Church, P.O. Box 1086, Hammond, LA 70404. To view and sign the family guest book, please visit www.harrymckneely.com.

I was a clarinet major in the mid-70's, also had him for woodwind methods, woodwind repair and clarinet ensemble. Under his mentoring, I became a band director/instrumental music teacher. It was with great pride that with his teachings, my students would place higher at auditions than other woodwind teacher's students.
Darlin Brady-Caro
Student
October 14, 2021
A wonderful man, a great professor, and a friendly co-professor. He gave guiding advice to young students, kind assistance to fellow profs, and guiding encouragement to administration, and lasting friendship to everyone he met.

Students, faculty, and friends, will carry his kind face and memories with gratitude for the time they were fortunate to have met Walter Barzenick.

I was a better student, teacher, performer, and professor because of the years he was part of my life.
Ron Nethercutt
Coworker
October 14, 2021
Piper I am sorry to hear of your father's passing.
Stephanie Coleman LeDoux
Acquaintance
October 13, 2021
Dear Peggy, My now deceased husband and I, Jim Duggan were music students at SLU
from 1960-1964 and remember your dear husband and you very well.

I did not know of his WWII service or other details of his long life and your
life together.

I send my sincere condolence for you and your family.
Sincerely, Judy (Duggan) Meyer.
Judy Duggan Meyer
Student
October 12, 2021
Dr. Barzenick was my clarinet professor while I was at SLU. I learned at lot from him. He was an excellent professor.
BG Meadows
School
October 12, 2021
I am so sorry for your loss. He lived an admirable life.
Monica Greer
Friend
October 6, 2021
Oh so sorry for your loss and the loss of a long time dear friend. Oh there are so many things I could say about Mr. Walter all goodBut not enough time. To say the least he was a very interesting individual. Good memories. Our prayers are with you.
Gordon Anderson
October 6, 2021
I had the pleasure of being a student of his in the latter part of the 90’s. He had such a passion for music. His passion was infectious. Later on in my life I would see him in the local grocery store and I was able to thank him for giving me that same passion for music. My condolences to his family and friends for the loss of such a great man.
Dawn Collura
Student
October 9, 2021
Where do I begin to express my gratitude for the influence of Walter Barzenick in my life and my teaching career? I was in awe at my first clarinet lesson in the Fall of 1958. I was filled with pride to introduce him as my teacher when he was the soloist with my Fair Park band. Mr. B was responsible for the thrills that I experienced as I performed with the Shreveport Symphony and countless other musical organizations. He influenced so many aspects of my life. To this day I often stop myself to ask "How would Mr. B have handled this?"

My sincere condolences to Peggy and the family.
Jim Franklin
Student
October 9, 2021
Walter certainly lived a full life. I was one of those lucky enough to have Walter as an instructor at SLU back in the day. Please accept Peggy and my condolences.
Paul Powell
Student
October 9, 2021
I was a member of Mr. Barzenick's Woodwind Methods class in the early 1960s, a percussionist studying to become a high school band director. He had the patience of Job of course and I successfully graduated from SLC in 1962. He was a member of that great faculty of that era who helped me become that high school band director and later a college band director. My condolences to his wife and family.

Dr. Charles F. Smith, Jr.
Charles Smith
Student
October 8, 2021
Peggy and family, I'm sorry about Walter's passing. From reading his obituary I can tell he was an amazing man. May God bring all of you comfort!
Glenn Sanchez
Family Friend
October 8, 2021
Oh so sorry to hear about Mr. Walter. He was quite an interesting And Fun gentleman to be around. I always enjoyed seeing and visiting with Mr. Walter. We will miss him greatly . Our prayers are with you.
Gordon Anderson
October 8, 2021
our prayers are with the family at this time. so sorry for your lose
patricia gill
Other
October 8, 2021
Peggy, Piper, Jay and kids, I was saddened to hear about "Uncle Walt's" passing. I first met him in 1972 when my father brought me to SLU for private flute lessons while I was in high school. I had 4 lessons with him in total, preparing me for All-State band auditions. Then, upon attending SLU, I enjoyed woodwind class, instrument repair class, directed individual studies, and more private lessons with Uncle Walt. He was always fair, reasonable, humorous, and made class FUN. I will miss him greatly. He was one of a kind. Much love, Tren Alford, SLU '78, '80.
Tren Alford
Student
October 7, 2021
Walter was one of the most interesting and engaging of persons to interview. His life story as a young man in France is fascinating. He told it to me in a matter of fact way, adding tidbits of colorful information that painted a picture of his life as a young soldier. I often think of him when I pass a WWII bunker here in the Ardennes (in France). It is a marvel that he survived. His memories of WWII Era Paris, the hospitals, the march, explosions, were all so clear and vivid as he retold them. Many people may not know that Walter also spoke Russian. He had very little chance to use it in America, but in WWII France, although it was forbidden to speak it due to military orders, he helped translate for hospital workers who needed to care for injured Russian soldiers. Walter knew when to to the right thing. Although I did not know him well, I will never forget his joie de vivre. I can picture the images from our conversations: him as a young boy selling newspapers (like you see in the movies), him at the conservatory playing music, being selected for the military band, joining the troops in battle and later, upon his return, falling in love with his dear wife and as the father of two wonderful children (and their spouses) whom I have had the pleasure to call my friends. I am glad to have known him. I offer my sincere condolences to his loved ones. Respectfully, Alice (Lisa) Verberne
Alice (Lisa) Verberne
Friend
October 7, 2021
Showing 1 - 16 of 16 results