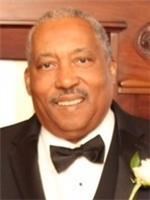 William "Bill" Johnson, Jr. 65, passed away Friday January 13th at Our Lady of the Lake Hospital. Bill, often called Billy Boy by his family was a resident of Baton Rouge, and a graduate of Capitol High School. He furthered his studies at Southern University and later enlisted in the United States Air Force. Bill was a 42 year employee of GSU/Entergy, and retired in 2016 as Line Supervisor for the Zachary network. Bill will be remembered as a "gentle giant" with an infectious smile and kind spirit. To know him was to love him. Bill also worked as a reserve officer for the Walker Police dept. He was member of Living Faith Christian Center. His survivors include his loving and devoted wife Mamie B Johnson; four daughters Trina Rowles (Stuart) of Vancouver, British Columbia and Amber Johnson of Regina, Saskatchewan, Tanisha Smith (Eugene) and Brandi Williams of Baton Rouge, La. ; two sons, William Johnson III (Ann) of Regina, Saskatchewan and Kevin Johnson of Walker, La.; three brothers Melvin "Jerome" Johnson Sr. (Berthell), Michael Johnson (Veronice), Terry Johnson (Deborah) all of Baton Rouge, LA; two sisters Madeline Coleman and Stephanie Robinson (Sirma-an) both of Baton Rouge; two brothers-in-law Clifton W Bell, Jr (Leona) of Baton Rouge, and Tyrone (Sue) Bell of Madison Wisconsin; four sisters-in-law Myrtle Anderson, Anita (Larry) Arnold, Vanessa (Theodore) Nauls of Baton Rouge. LA. and Carolyn Bledsoe of Atlanta, GA.; nine grandchildren, Elizabeth Rowles, William Johnson, IV, Gracelen Johnson, Kevin Smith-Johnson, Jr, Caleb Smith-Johnson, Payton Smith-Johnson, Hannah Mcbride, and Caden and Layla Smith. A host of friends including his Entergy family; a number of nieces, nephews, cousins, aunts uncles and friends. Visitation will be held on Friday, Jan. 20 at Living Faith Christian Center Faith Place, 6180 Winbourne Ave., Baton Rouge, LA, from 8:30 a.m. until Religious services at 10:30 a.m. Services conducted by Bishop Raymond Johnson with Interment at Louisiana National Cemetery in Port Hudson, Louisiana.
Published by The Advocate from Jan. 18 to Jan. 20, 2017.
To plant trees in memory, please visit the Sympathy Store.
MEMORIAL EVENTS
To offer your sympathy during this difficult time, you can now have memorial trees planted in a National Forest in memory of your loved one.
MAKE A DONATION
MEMORIES & CONDOLENCES
24 Entries
Mamie, I am still praying for you. The love you and Bill shared was true. He is truly missed. Thank you for giving him so much joy. I love you. Necie
Veronice Johnson
January 31, 2017
My deepest sympathy to the Johnson family with all my love. May God continue to keep you in his care.
Melonee Wicker
January 25, 2017
Sending our sympathy and prayers and letting you know our hearts go out to the families at this time of sadness. As you share, talk and remember, may you find that the one you love so much is still living in your hearts.
Shelton and Wilhelmina Briggs
January 23, 2017
I am deeply sorry for your family's loss. May your hearts find comfort in God's beautiful promises for the future. John 6:40
January 22, 2017
Rest in peace Billy 'Boy' Aunt Nellie & I will sit & talk with you when we get there.
Eugene Scott
January 20, 2017
To the Johnson Family: Our thoughts and prayers are with you.
Felton L. Kerry
January 20, 2017
May God give the family comfort and peace as you release the body and hold the memories close to your heart today and always.
Betty Myles
January 20, 2017
In loving memory of a wonderful person. We will love you and miss you always.
Hilda Carter
January 20, 2017
To know Bill was to love him. He was a truly a kind, loving, gentle spirit to all he met. He was an obedient servant and when God called, he answered the call. Although he will be missed, God will be your strength through this transition. Much love and prayers.
Kathy Holmes Williams
January 19, 2017
My prayers and thoughts are with you during your time of sorrow. Remember to always cherish the loving memories. May peace be with you.
Diane Rankins
January 19, 2017
Our prayers are with the family.
Joshua and Shirley Young
January 19, 2017
Rest in Heavenly Peace "Bill," I am definitely going to miss you!

Condolences to the family, I will be praying your strength in the Lord.
January 19, 2017
Lorraine and Family I'm so sorry to hear about Bill I felt he was a very good person. You are in my thoughts and prayer and I know that God is in control. With deepest sympathy. Debra White Jones
January 19, 2017
Bill Johnson was my friend. RIP Billy Boy.
January 19, 2017
May the peace of God keep you in perfect peace as you keep your mind stayed on Him.
Min. Ruby Paynes
January 19, 2017
May the love of friends and family carry you through your grief.
Olivet Coats O'Connor and Family
January 19, 2017
Florence Miller
January 19, 2017
I am sorry for your loss. Bill was a loving a caring person. He impacted the lives of so many people. I pray that you find comfort and solace in God's Peace, love and His Word. Flo Miller
Florence Miller
January 19, 2017
Lorraine and Family you are in our thoughts and prayers. With deepest sympathy, Troy and Patrice B. Scott
Patrice Scott
January 19, 2017
My prayers and thoughts are with Mamie and their families. May God bring you comfort and peace.
Yvonne Woods St. Etienne
January 19, 2017
As the days and weeks pass, and as you return to life's routine, may you continue to feel comforted by the love and support of family and friends.
MINISTER ALTON AND LINDA W BRYER
January 18, 2017
Lorraine I'm so sorry for your Loss! didn't get the chance to meet Bill, but from what I've heard a true gentlemen indeed. I will be praying for you and the Family.
Jewell Revish
January 18, 2017
Our prayers and thoughts are with the family. Praying that God will comfort and strengthen you. God Bless, Darryl & Veronica Ricard
VERONICA RICARD
January 18, 2017
My dear Brother in law. Ours was but a short time but the hearts of our family loved you dearly. We will take care of your sweet Mamie.
Vanessa (Renee), Leigha & Wayne
January 18, 2017
Showing 1 - 24 of 24 results